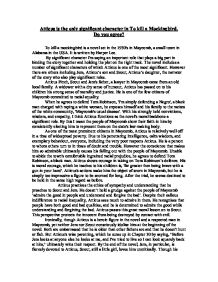 Atticus is the only significant character in To kill a Mockingbird. Do you agree?

Atticus is the only significant character in To kill a Mockingbird. Do you agree? To kill a mockingbird is a novel set in the 1930's in Maycomb, a small town in Alabama in the USA. It is written by Harper Lee. By significant character I'm saying an important role that plays a big part in binding the story together and holding the plot on the right track. The novel includes a number of significant characters of which Atticus is one of the most significant. However there are others including Jem, Atticus's son and Scout, Atticus's daughter, the narrator of the story who also play significant roles. Atticus Finch, Scout and Jem's father, a lawyer in Maycomb came from an old local family. A widower with a dry sense of humour, Atticus has passed on to his children his strong sense of morality and justice. He is one of the few citizens of Maycomb committed to racial equality. When he agrees to defend Tom Robinson, 'I'm simply defending a Negro', a black man charged with raping a white woman, he exposes himself and his family to the racism of the white community, 'Maycomb's usual disease'. With his strongly held convictions, wisdom, and empathy, I think Atticus functions as the novel's moral backbone a significant role. ...read more.

He is four years older than Scout is, he gradually separates himself from her games, but he remains her close companion and protector throughout the novel. Jem moves into adolescence during the story, and his ideals are shaken badly by the evil and injustice that he perceives during the trial of Tom Robinson, he too represents morality and plays a significant role in the story. If Scout is an innocent girl who is exposed to evil at an early age and forced to develop an adult moral outlook, Jem finds himself in an even more turbulent situation. His awful experience at Tom Robinson's trial, when he sees that justice is not always served leaves him vulnerable and confused at a critical point in his life. Nevertheless, he admirably keeps his commitment to justice that Atticus has taught him and maintains it with deep conviction throughout the novel. Atticus tells Scout that 'Jem simply needs time to process what he has learned'. The strong presence of Atticus in Jem's life seems to promise that he will recover his equilibrium. Although Jem is left unconscious with a broken arm after Bob Ewell's climactic attack, the fact that Boo Radley unexpectedly comes to his aid and saves him reminds him of the good in people. ...read more.

The basic development of her character is governed by the question of whether she will emerge from that contact with her conscience and optimism intact or whether she will be bruised, hurt, or destroyed like Boo Radley and Tom Robinson. Thanks to Atticus's modern upbringing and wisdom, Scout learns that though humanity has a great capacity for evil, it also has a great capacity for good, and that the evil can often be mitigated if one approaches others with an outlook of sympathy and understanding. Scout's development into a person capable of assuming that outlook marks the culmination of the novel and indicates that, whatever evil she encounters, she will retain her conscience without becoming cynical or jaded. Though she is still a child at the end of the book, Scout's perspective on life develops from that of an innocent child into that of a near grown-up. That is why I consider her one of the significant figures in the novel. She is the character that carries the reader through the story as the narrator and as the character the novel follows. Atticus is not the only significant character in to kill a mockingbird. Without each other the storyline wouldn't be strong. Each character acts as a 'foil' for the other and are interdependent in their significance however he does play the most important role as the novels moral backbone, voice of conscience and guide to his well brought up children. Alice Renouf-Donaldson ...read more.