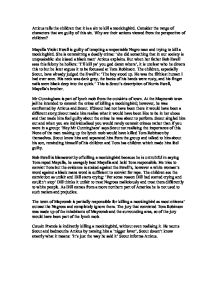 Atticus tells the children that it is a sin to kill a mockingbird. Consider the range of characters that are guilty of this sin. Why are their actions viewed from the perspective of children?

Atticus tells the children that it is a sin to kill a mockingbird. Consider the range of characters that are guilty of this sin. Why are their actions viewed from the perspective of children? Mayella Violet Ewell is guilty of tempting a respectable Negro man and trying to kill a mockingbird. She is committing a deadly crime: 'she did something that in our society is unspeakable: she kissed a black man' Atticus explains. But when her father Bob Ewell sees this felony he hollers: 'I'll kill ya' you god damn whore', it is unclear who he directs this to but he later argues it to be focussed at Tom Robinson. ...read more.

If Scout had not have been there it would have been a different story; Scout made him realise what it would have been like to be in her shoes and that made him feel guilty about the crime he was about to perform. Scout singled him out and when you are individualised you would rarely commit crimes rather than if you were in a group: 'Hey Mr Cunningham' says Scout not realising the importance of this. None of the men making up the lynch mob would have killed Tom Robinson by themselves. Scout knew him and separated him from the group and talked to him about his son, reminding himself of his children and Tom has children which made him feel guilty. ...read more.

As Dill comes from a more northern part of America he is not used to such racism and prejudice. The town of Maycomb is partially responsible for killing a mockingbird as most citizens' outcast the Negroes and completely ignore them. The jury that convicted Tom Robinson was made up of the inhabitants of Maycomb and the surrounding area, so of the jury would have been part of the lynch mob. Cousin Francis is indirectly killing a mockingbird, without even realising it. He taunts Scout and badmouths Atticus by naming him a 'nigger lover', Scout doesn't know exactly what it means: 'It's just the way he said it' Scout informs Atticus. ...read more.