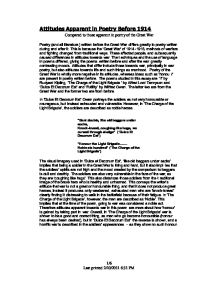 Attitudes Apparent in Poetry Before 1914 Compared to those apparent in poetry of the Great War Poetry (and all literature) written before the Great War differs greatly to poetry written during and after it. This is because the 'Great War' of 1914-1918, methods of warfare and fighting changed from traditional ways. These affected people, and subsequently caused differences in attitudes towards war. The techniques and the use of language in poems differed, giving the poems written before and after the war greatly contrasting moods. Attitudes that differ include those towards war, principally in war poetry, but also attitudes towards life and such things as manhood. Poetry of the Great War is wholly more negative in its attitudes, whereas ideas such as 'honour' are present in poetry written before. The poems studied in this essay are 'If' by Rudyard Kipling, 'The Charge of the Light Brigade' by Alfred Lord Tennyson and 'Dulce Et Decorum Est' and 'Futility' by Wilfred Owen. The latter two are from the Great War and the former two are from before. In 'Dulce Et Decorum Est' Owen portrays the soldiers as not very honourable or courageous, but instead exhausted and vulnerable. However, in 'The Charge of the Light Brigade', the soldiers are described as noble heroes. "Bent double, like old beggars under sacks, Knock-kneed, coughing like hags, we cursed through sludge" ('Dulce Et Decorum Est') "Honour the Light Brigade....... Noble six hundred" ('The Charge of the Light Brigade') The visual imagery used in 'Dulce et Decorum Est', 'like old beggars under sacks' implies that being a soldier in the Great War is tiring and hard, but it also implies that the soldiers' spirits are not high and the mood created by the comparison to beggars is dull and deathly. The soldiers are also very vulnerable in the face of the war, as they are 'coughing like hags'. This also distances those soldiers from the traditional image of the brave hero who is healthy and unharmed. ...read more.

The imagery in 'Dulce Et Decorum Est' shows the horrors of war, and also the horrors of dying in a war. The soldier that has been a victim of gas poisoning has blood 'gargling' from his lungs. 'Gargling' is especially powerful because it is not only visual but it is also aural, and therefore makes the image even more vivid in the reader's mind. As it is the description of a horrific death it shows that death is not glorious. Therefore it is possible to denote that the attitude towards death in the Great War was that death was indeed a gruesome affair, and dying was really not glorious or honourable as people have thought before. In 'The Charge of the Light Brigade' however, there is only one line directly related to men dying, and that refers to the dying men as 'heroes'. Because the death is not described visually, (no horrors of war are described visually in this poem) the reader feels as if the 'heroes' who died did so while being brave and facing the enemy, and that they died with dignity. Although this may not have been the case, because there were no mass casualties at the time dying was seen to be honourable, and this is what is conveyed by this poem. 'Fell' is also a powerful verb because it is more metaphorical than stating literally that they died, and it implies that they were killed while they were trying, and while they were fighting for what they believed in. It implies they were martyrs. Overall, the description of the death in 'Dulce Et Decorum Est' implies that death was not seen as noble or brave in the Great War, whereas the metaphorical statement of the 'heroes' dying in 'The Charge of the Light Brigade' implies that death was honourable before. In Futility, death is shown to be stronger than life, and Owen shows that all creation is weaker than death. ...read more.

This therefore means that war was considered a negative aspect of human nature at the time of the Great War. Because it caused so many deaths, attitudes to war at the time were that it causes horrible deaths, and therefore most of this poem is attributed in describing and showing how gruesome and wrong a death is, especially with modern warfare at the time. As is evident from these poems, there was an attitude change towards war when the Great War started. This was mainly because of the heavy casualties brought about by new inventions in firearms such as the machine gun. These made infantry charges very hard to survive, and when any soldier saw the no man's land, littered with corpses, they knew this was a totally different type of war. Therefore all literature of this war changed, and suddenly the concept of martyrdom changed to death in a massacre. Also, unconventional warfare, like gassing, terrified men, who had never seen these weapons before. This was seen in literature. These new weapons were in no way honourable, and so these destroyed the whole concept of fighting 'bravely' for honour. People, including war poets, realised that death was near and it was easy to become one of the countless casualties of the Great War. In conclusion, poetry before 1914 was very much different to poetry of the Great War in how it saw death, life, and other values such as manhood and honour (the latter two which almost totally disappeared in the War). Before 1914, wars have relatively little casualties, when compared with the millions dead in the Great War, and so to perceive death as brave and honourable was common. The war did not only change the perception of honour, death, or manhood, however, which are just war-related. It changed, as is shown in literature, the perception of the whole of society and almost every other attitude towards the Country, towards people, and towards society. ?? ?? ?? ?? 1/6 Last printed 10/31/2007 7:12:00 PM ...read more.