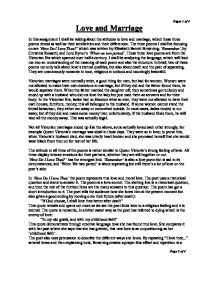 Attitudes to love and marriage in 'How Do I Love Thee?', 'Remember', and 'When we two parted'.

Pages 1 of 4 Love and Marriage In this assignment I shall be talking about the attitudes to love and marriage, which these three poems reveal as well as their similarities and their differences. The three poems I shall be focusing on are 'How Do I Love Thee?' which was written by Elizabeth Barrett Browning; 'Remember', by Christina Rossetti; and Lord Byron's 'When we two parted'. These three love poems are from the Victorian Era which spanned over half a century. I shall be analysing the language, which will lead me into an understanding of the meaning of each poem and also the structure. In brief, two of these poems not only talk about love's eternal qualities, but also about death and the pain of separating. They are unanimously romantic in tone, religious in outlook and hauntingly beautiful. Victorian marriages were normally strict, a good thing for men, but bad for women. Women were not allowed to make their own decisions in marriage, but if they did and the father found them, he would separate them. When the father married the daughter off, they sometimes got unlucky and ended up with a husband who did not love the lady but just used them as servants and for their body. ...read more.

She uses tactics like guilt and fear to show how she is feeling about this: "When you can no more hold me by the hand, nor I half turn to go yet turning stay..." This quote shows the emptiness of all their plans now she is going to die. The poet also uses emotional language throughout the poem but in an understated way: "You tell me of our future that you planned". This quote expresses her pain at their future now being brutally cut short, a future apart (in the physical world, at least). The poet does not use techniques like exaggeration and hyperbole as Barrett Browning does - she plainly and simply states the facts, without relying on a technique to strengthen her message. It starts off with a sad and calm language: "Remember me when I am gone away" The language then moves into a deeper tone where we sense her understandable fear. The poem describes that if 'thee' forgets her for a while and remembers again, she does not want him to grieve: "Yet if you should forget me for a while and remember again do not grieve" This powerfully shows us how much the poet loves the person and does not want him to mourn forever. ...read more.

The poet moves on to describe how his reaction was when he saw his ex-lover again. The relationship seems to be one sided but we can not be sure, that is what captivates us - is it ever fully over?: "After long years, How shall I greet thee?" I think he mentions this unchanging passion of his, as it is a sad emotional truth experienced by many people. William Shakespeare's romantic poem, 'Sonnet 116' (1590s-1600) is rather like the three studied, despite being written two hundred years earlier. He says that true love never changes no matter what happens in life, it is 'an ever-fixed mark'. He shares Barret Browning's theme of love: "Love is not time's fool" - as you age you still love, and if you die you still love, it is 'eternal'. Christina Walsh's 'A Woman to Her Lover' was written in 1900. She is an early feminist who does not trust men and outlines what she fears in a relationship- "Wearing out my life...no servant will I be" She is looking for equality - "I shall be your comrade, friend, and mate...our co-equal love" This is unusual for the time, and is different in tone from Barret Browning's slavish love. However, she mentions religion also: "Until we reach the very heart of God". ...read more.