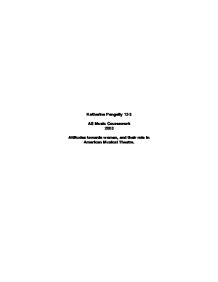 Attitudes towards women, and their role in American Musical Theatre.

Katherine Pengelly 12�3 AS Music Coursework 2003 Attitudes towards women, and their role in American Musical Theatre. For my essay, I am going to look at the attitudes towards women, both from men and other women, and the significant role that that women had in telling the stories in American musical theatre. Showboat was the first musical of its kind. Up to this point, musicals consisted of songs and dances, with often feeble storylines based around the big stars. Showboat had a real story, adapted from a novel, and both the singing and dancing told the story. At the beginning of Showboat, after we have been introduced to the main characters, we hear the main female characters attitude towards men and love. 'Fish got to swim, birds got to fly, I got to love one man till I die. Can't help lovin' dat man of mine.' Julie seems like a surrogate mother to Magnolia, giving her advice, as we see Magnolia's relationship with her own mother is very strained. Parthy doesn't want her daughter to have anything to do with the stage or Ravenal, the two things her daughter is most passionate about. ...read more.

It seems from this that, for her, marriage is a way of bettering herself, whereas Julie is marrying for love, although she doesn't tell Billy till it's too late. In Carousel, there are several 'taboo' subjects, the first being 'the older woman,' the second being domestic violence. The carousel owner becomes jealous of the relationship between Billy and Julie, we guess this is because she wants him for herself. When it becomes apparent she can't have him, she fires him. After Billy and Julie get married, Julie reveals to Carrie that Billy has been hitting her, as he is out of work and angry. Carrie and Mr Snow are now engaged and we see evidence of how their marriage is going to be, when Mr Snow interrupts Carries singing. Billy mistreats Julie in many ways but he never does that. Many musicals have an older woman authoritative character who, even in a male dominated area seems to be respected and taken seriously. In Carousel this is Nettie, and I have highlighted other examples throughout my essay. Julie tells Billy that she is pregnant, and then the story kills Billy off. ...read more.

The women all view each other with jealousy and suspicion. The men's attitude towards women is summed up in the song 'In praise of women.' 'Women, women....... Understanding and reliable, Knowing their place, Insufferable, yes, but gentle, Their weaknesses are incidental, A functional yet ornamental race.' This was a typical attitude for the time period it was set in, but out of place in the liberal seventies. In conclusion, the attitude towards women has changed and developed with that in the developed world. Musicals have both reflected this, whilst at the same time maintaining a continuity of strong female characters. Musicals, whilst being looked at as 'light entertainment,' constantly looked at new issues, often to do with women, to challenge their audiences and society at large. The role women played was obviously integral to the musical's stories as well as also in raising these issues. The roles women played varied widely from mother, daughter, strong, weak, and authoratitive. The issues varied from domestic violence to single parents, and forced society to pay attention to the way these were affecting women's lives. This focus helped play a part in getting equal rights for women and reflects on the society we have today. ...read more.