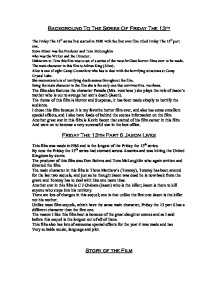 Background To The Series Of Friday The 13th

Background To The Series Of Friday The 13th The Friday The 13th series first started in 1980 with the first ever film titled Friday The 13th part one. Steve Miner was the Producer and Tom McLoughlin who was the Writer and the Director. Unknown to Tom this film was to set of a series of the most brilliant horror films ever to be made. The main character in this film is Adrian King (Alice). Alice is one of eight Camp Councilors who has to deal with the horrifying situations at Camp Crystal Lake. She encounters lots of terrifying death scenes throughout the film. Being the main character in the film she is the only one that survives Mrs. voorhees. The film also features the character Pamela (Mrs. voorhees ) she plays the role of Jason's mother who is out to avenge her son's death (Jason). The theme of this film is Horror and Suspense, it has been made simply to horrify the audience. I chose this film because it is my favorite horror film ever, and also has some excellent special effects, and I also have loads of behind the scenes information on the film Another great star in this film is Kevin bacon that started of his film career in this film And went on to become a very successful star in the box office. ...read more.

They both hear a noise and go back onto the RV. While Cort is driving Jason pulls Nikki into the toilet and crushes her head through the RV wall. Cort is playing music very loud so he does not hear Jason approaching him he looks into the rear view mirror and sees Jason as he sticks a knife through Cort's head and the RV spins out of control, when it stops Jason gets out unharmed. Back at the camp Jason murders Sissy and Paula and uses their blood to paint the cabin walls. Tommy returns to the Town with the Sheriff's daughter Megan and the Sheriff find him and arrests him for the murder of Cort and Nikki. Later on when the deputy is minding Tommy and Megan she tricks him and busts him out. All the Police get suspicious and go to the cam to investigate. Jason kills two of the police and the Sheriff has a one on one fight with Jason, Jason kills him and goes after Megan, he tries to crush her head but Tommy distracts him and lures him into the lake. Jason heads for Tommy who is in a boat waiting for him, when he gets there he disappears under water, after a minute Jason jumps up and has a little battle with Tommy, Tommy manages to slip the chain ...read more.

Eventually Tommy gets the chain over Jason's body and Jason sinks to the bottom. On the way down Jason grabs Tommy's foot and tries to take him with him, Tommy fights back and pulls the cord to the engine and after a couple of unsuccessful tugs he finally starts it and lures Jason's head into the propeller, ad cuts open Jason's head. Scene Analysis 2 In scene 2 the camera work is very difficult, there are tons of close ups a few extreme close ups. There are also a lot of big extreme close ups from Tommy to Jason. There are on or two long shots like when Tommy is looking at Megan from the boat. There is one over shoulder shot and plenty of rolling. There are lots of sound effects in this scene. There is a lot of Diegetic sounds like the shouting and the background music, but there is also lots of Non Diegetic son effects like burning and the water splashing. The lighting in this scene is again very hard because it is dark. There are mostly key lights and filler lights, but there are some bits of back lighting like the cabin lights. The editing is very simple because there is nothing but simple cuts from Tommy to Jason, and there are only a couple of jump cuts from Tommy to Megan. ...read more.