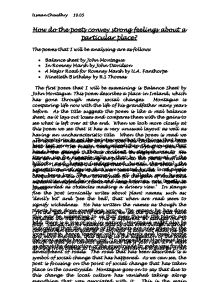 Balance sheet by John Montague - In Romney Marsh by John Davidson - A Major Road for Romney Marsh by U.A. Fanthorpe - Ninetieth Birthday by R.S Thomas - How do the poets convey feelings about a particular place?

How do the poets convey strong feelings about a particular place? The poems that I will be analysing are as follows: * Balance sheet by John Montague * In Romney Marsh by John Davidson * A Major Road for Romney Marsh by U.A. Fanthorpe * Ninetieth Birthday by R.S Thomas The first poem that I will be examining is Balance Sheet by John Montague. This poem describes a place in Ireland, which has gone through many social changes. Montague is comparing life now with the life of his grandfather many years before. As the title suggests the poem is like a real balance sheet, as it lays out losses and compares them with the gains to see what is left over at the end. When we look more closely at this poem we see that it has a very unusual layout as well as having an uncharacteristic title. When the poem is read we are able to understand why the poet has chosen such a title and layout. The reason being that he is trying to show the reader the change that has occurred through the times. He has done this by separating the poem into two parts, 'loss' and 'gain'. Loss signifies the things that have been lost while gain signifies the things that have been acquired. The poet compares the loss of the countryside for the gain of roads and modern development. Hence the reason for the title, 'Balance Sheet'. The poets tries to get the point across that the things that have been lost were in a way more sacred then the resources that have been gained. This is evident in stanzas one to six. Stanza six for example tells us that by the removal of the hillocks and humps (underground burial chambers) the superstition and stories that were created by the local people have been lost; 'The removal of all hillocks and humps, superstition styled fairy forts and long barrows, now legally to be regarded as obstacles masking a drivers view.' ...read more.

Davidson also talks about the symbolic beauty of the place, for instance in stanza seven he describes waves continuously clashing onto the shore, which signifies that time never stops hence the eventual arrival of new technology, 'The beach, with all its organ stops pealing again, prolonged the roar.' Throughout the poem the beauty of Romney Marsh is shown which enables the reader to understand the poet's thoughts, which are that how can such beauty be overcome by changes that ruin these very surroundings. Davidson could also be suggesting that God has given us such beauty that by man's interference with nature we have destroyed God's bounty. Davidson uses a lot of poetic language in this poem, such as 'o'er' which means over and 'sing', which means blow. This is mainly to keep the fluent flow of rhythm within the poem. The main feelings of the poet in this poem are similar to Montague's in his poem, and they are that everything may be changing but the things that are gradually vanishing from the surroundings are more beautiful than the social changes that have happened. Davidson believes that there is so much beauty, harmony and heritage in Romney Marsh that it should not be tampered with. Davidson conveys his feelings to the reader by describing the beauty of Romney Marsh against the unattractiveness of the social changes, he also does it by the use of descriptive metaphors and the use of symbolic and poetic language. The third poem that I am looking at is 'A Major Road to Romney Marsh' by U.A. Fanthorpe. In this poem, the poet is commenting on a proposed road that may run through the marsh. She offers contrasting descriptions of what the marsh is like now and how it would be if the road came through it. Fanthorpe's descriptions of the road as it is now are flowing and beautiful in addition to that she makes the road to be self-contained, 'It is a kingdom, a continent' furthermore she notes all the fine details, such as 'windcurled sheep', which emphasizes the wildness of the place. ...read more.

This also draws us in as we imagine ourselves in a similar situation, trying to connect with an old person. The poets try to get the point across in many different ways. In 'Balance Sheet', the poet has separated the poem into two columns, 'loss' and 'gain'. By giving the poem, this specific structure it gives it a great deal of impact. 'In Romney Marsh' is a poem where the poet has used beautifully poetic language to describe the beauty of the place while making the social changes to be evil and bad. 'A major road to Romney Marsh' is a great example of how the poet is trying to get the point across, as Fanthorpe has used two opinions, one that describes the beauty of the place and the other of what the road will bring. She makes the description of the marsh beautifully poetic while making the description of the road to be prosaic, by using abbreviated and common words. This is done to show the reader that Romney Marsh is a beautiful place and by building a road through it will destroy its beauty. In the poem by R.S.Thomas we see that he has emphasized the point that the age gap between two people does not allow much connection. By doing this he gets the point across to the reader that as time goes on, change will occur and nothing can be done about it. An example of this is when he says that the old woman was once wise but not anymore hence telling us that change will happen and as well as changing the surroundings it will also change the person. I have now analysed the poems, and found that change is the main subject of all the poems which suggests to me that we cannot stop the changes that will occur as they are apart of man's will to progress into the future. Usman Choudhry 10.05 ...read more.