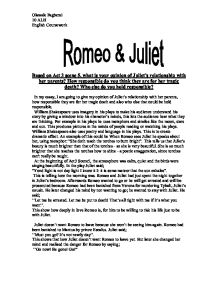 Based on Act 3 scene 5, what is your opinion of Juliet's relationship with her parents? How responsible do you think they are for her tragic death? Who else do you hold responsible?

Based on Act 3 scene 5, what is your opinion of Juliet's relationship with her parents? How responsible do you think they are for her tragic death? Who else do you hold responsible? In my essay, I am going to give my opinion of Juliet's relationship with her parents, how responsible they are for her tragic death and also who else that could be hold responsible. William Shakespeare uses imagery in his plays to make his audience understand his story by giving a window into his character's minds, this lets the audience hear what they are thinking. For example in his plays he uses metaphors and similes like the moon, stars and sun. This produces pictures in the minds of people reading or watching his plays. William Shakespeare also uses poetry and language in his plays. This is to create dramatic effect. An example of this could be When Romeo sees Juliet he speaks about her, using metaphor: "She doth teach the torches to burn bright". This tells us that Juliet's beauty is much brighter than that of the torches - so she is very beautiful. She is so much brighter that she teaches the torches how to shine - a poetic exaggeration, since torches can't really be taught. At the beginning of Act3 Scene5, the atmosphere was calm, quiet and the birds were singing beautifully. ...read more.

I think Lady Capulet was in one way or the other responsible for Juliet's death. She should have paid more attention to Juliet's wishes, listened to her opinions and maybe given advice on dealing with Romeo being banished to Mantua. Lady Capulet didn't know about Juliet and Romeo love for another because Juliet was sacred of telling her about it. Lord Capulet is a proud, short tempered man. He is a middle class rich man; he is the lord, head of his household. Lord Capulet was glad and happy about Juliet getting married, He wanted Juliet to marry Paris because he wanted to be popular, important and also have more wealth. He wants to be in a high rank position. Lord Capulet reacted badly when he heard Juliet had refused to marry Paris. He was very angry and started to question Juliet why she refused to marry Paris. This changed the mood of the scene. Lord Capulet said; "Doth she gives us thanks? Doth she not count her blest, unworthy as she is" This shows how upset and mad lord Capulet is because he has made a lot of arrangements for the engagement and also because of the status. This made Juliet feel alone, she feels like she has just been betrayed by her mother, father and even the nurse because they didn't respect her decision. ...read more.

This would get the audience involved because they know if Juliet was to marry Paris it wouldn't be for love it would be for money. As a member of the audience I would feel sad and sorry for Romeo and Juliet because their life hasn't been the type of life they wanted or the life anyone deserves. Everything was destroyed by the feud between the two families, they are always quarrelling and fighting which leads to deaths. I think in those days young children should have been allowed to make their own decisions, this is what Juliet's parent should have done, allow her to make her own decisions and also discuss with her whether she wanted to get married to Paris or not. They should have been really close to her and also listen to what she says and what she wanted which was to marry Romeo. My advice for Juliet would be not to marry someone secretly especially when children obeyed and listen to what their parents tells them to do at the Victorian times, parents arranged marriages so that they will be more wealthy meaning they get their children to marry someone high up in social class. I guess after the death of Romeo and Juliet, both families have come together to discuss why things went wrong. Romeo and Juliet's death ended the feud between the two families. ?? ?? ?? ?? Olawale Fagbemi 10 ALH English Coursework ...read more.