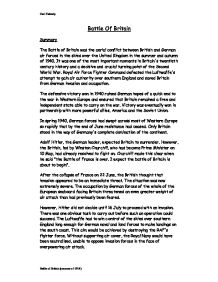 Battle Of Britain Summary The Battle of Britain was the aerial conflict between British and German air forces in the skies over the United Kingdom in the summer and autumn of 1940. It was one of the most important moments in Britain's twentieth century history and a decisive and crucial turning point of the Second World War. Royal Air Force Fighter Command defeated the Luftwaffe's attempt to gain air authority over southern England and saved Britain from German invasion and occupation. The defensive victory won in 1940 ruined German hopes of a quick end to the war in Western Europe and ensured that Britain remained a free and independent state able to carry on the war. Victory was eventually won in partnership with more powerful allies, America and the Soviet Union. In spring 1940, German forces had swept across most of Western Europe so rapidly that by the end of June resistance had ceased. ...read more.

Without supporting air cover, the Royal Navy would have been neutralised, unable to oppose invasion forces in the face of overpowering air attack. The German occupation of Denmark and Norway in April caused the weakening of the RAF fighter defences as squadrons had to be spread across northern Britain to oppose any possible threat from Scandinavia. In May and June, the Battle of France, especially the intensaive action during the evacuation of Allied armies at Dunkirk, had taken a heavy toll with 477 fighters lost and 284 pilots killed. All but three of Fighter Command's squadrons had been engaged. On 3 June, Air Chief Marshal Sir Hugh Dowding, AOC (army operational command) -in-C Fighter Command, told Britain that if the expected German offensive came at this moment, he could not guarantee air control for more than 48 hours. Nevertheless, he was hopeful that a reasonable break from intensive operations would help to restore his Command to full strength. ...read more.

For the British, it ran from 10 July - 31 October 1940. For the Germans it began on 13 August, Adlertag or "Eagle Day". The key to success for the Luftwaffe was the destruction of the RAF's fighter force. On the other hand, for Fighter Command it was to hold back bombing and inflict losses, preferably before the target was reached. The campaign itself was marked by several distinct phases. As the battle developed, the Luftwaffe attacked targets moving further and further inland from coastal shipping to forward fighter airfields and radar stations, 11 Group sector airfields and finally London. The crucial period of the battle was between 24 August and 15 September. Fighter Command came closest to losing when its vital sector airfields around London were attacked. The decisive turning point came on 7 September when the Luftwaffe switched its attention to the capital. This tactical mistake allowed Fighter Command to recover its strength rapidly to inflict, on 15 September, losses significant enough to show the Germans the battle could not be won. Carl Flaherty Battle of Britain (summer of 1914) ...read more.