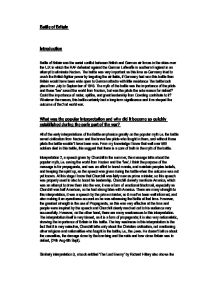 Battle of Britain Introduction Battle of Britain was the aerial conflict between British and German air forces in the skies over the U.K in which the RAF defeated against the German Luftwaffe in southern England in an attempt to eliminate Nazism. The battle was very important as this time as Germany tried to crush the British fighter power by targeting the air fields, if Germany had won this battle than Britain would have been wide open to German attacks with little resistance The battle took place from July to September of 1940. The myth of the battle was the importance of the pilots and these 'few' saved the world from Nazism, but was the pilots the sole reason for defeat? Could the importance of radar, spitfire, and great leadership from Dowding contribute to it? Whatever the reason, this battle certainly had a long-term significance and it re-shaped the outcome of the 2nd world war. What was the popular interpretation and why did it become so quickly established during the early part of the war? All of the early interpretations of the Battle emphasize greatly on the popular myth i.e. the battle saved civilization from Nazism and the brave few pilots who fought in them, and without those pilots the battle wouldn't have been won. From my knowledge I know that well over 500 soldiers died in this battle, this suggest that there is a core of truth in the myth of the battle. Interpretation 2, a speech given by Churchill in the summer, the message talks about the popular myth, i.e. saving the world from Nazism and the 'few', I think the purpose of the message is for propaganda, and was an effort to boost morale, and maintain peoples beliefs, and keeping the spirit up, as the speech was given during the battle when the outcome was not yet known. At this stage I know that Churchill was fairly new as prime minister, so this speech was properly used to also to boost his leadership. ...read more.

In interpretation 7, it puts forward a different view although at one element it conveys the popular myth, i.e. the few, and saving civilisation, on the other hand it introduces other factors which contributed to the success of Britain, it mentions the importance of radars and for the first time ever it mentions Sir Hugh Dowding and how his great leadership also contribute to the success of the Battle. The main drastic reason for the change of opinion is the interpretation were written quite a long time after the war, i.e. 4 years therefore it would be less offending if the truth were written. However although written about 4 years after the battle, people were still quite sensitive of the issue, whilst the battle has been won, people were still dying during this period, and memories were still fresh in peoples mind, so therefore this interpretation cant go too much off the track, whilst mentioning the pilots, it slightly begin to bring in other factors that may have contributed. This interpretation is fairly truthful and correct as it was written for a popular newspaper, it was also written fairly close to the event, and it should be well informed. Most importantly, it considers a wide range of facts, which contributed to the success of the battle, therefore making this more balanced. However, on the other had its very biased, its very nationalistic in its tone, and it's a piece of propaganda, catering for an audience. Similarly, interpretation 15, an article for A-level students in particular suggests strongly that Germany never intended to invade Britain, and as a result the battle was a hoax. Germany never seriously intended to attack Britain and the battle was a diversion for the later attack on Russia, this interpretation doesn't mention the few, and basically saying the myth is a myth. The reason for this opinion is because it was written so long after the war-1997 and was produced at a less nationalistic time and could say what he ...read more.

there is Dowding, chief of fighter command, whom encouraged the development of radar, which was a great advantage to Britain as it meant it could track the German raids more efficiently, thus destroying it at a faster rate. I think all these factors intertwined together makes up the building blocks for the myth. Without the invention of Spitfires, the pilots would have nothing to fly in, without the training programmes the pilots would have been killed in seconds, without the strategic plan and encouragement radar from Dowding, the battle would probably have been lost. Therefore overall, although there is an element of truth to the myth about the pilots, I believe all these factors together are essential in winning the battle, and without any one of them, the outcome of the battle would've been different. As to the battle, so often considered not such an important piece of history, especially to the Germans i.e. interpretation 12, but I think the battle was very important for the British, if least, it was a psychological victory for them. It took sheer gut, determination; true fighting spirit, and organisation for them to become victorious and the death of pilots a marks this victory. The battle certainly had long-term implications for the Germany, and although again, there is a core of truth to the battle i.e. how Britain saved the world form Nazism, but I don't think compared to war, the battle was significant. The 'insignificant' factor has been revealed by several of the later interpretations, and this opinion cannot be ignored, i.e. interpretations 8,9,10,12,13,15,and 16 all suggest that Germanys main interest were of Russia. I think the battle was even though by regarded as of much importance for many countries later on, I think at the time it was a psychological victory for Britain. Lives were lost in that battle, no one can fault that, and it was Britain first ever attempts in destroying Nazism and I think every one should bow their heads just for that. ...read more.