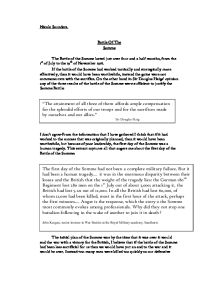 Battle Of The Somme.

Nicole Saunders. Battle Of The Somme The Battle of the Somme lasted just over four and a half months, from the 1st of July to the 19th of November 1916. If the battle of the Somme had worked tactically and strategically more effectively, then it would have been worthwhile, instead the gains were not commensurate with the sacrifice. On the other hand in Sir Douglas Haigs' opinion any of the three results of the battle of the Somme were sufficient to justify the Somme Battle: I don't agree-From the information that I have gathered I think that if it had worked to the success that was originally planned, then it would have been worthwhile, but because of poor leadership, the first day of the Somme was a human tragedy. ...read more.

Having said that over the four and a half months we did push the Germans back quite considerably, and captured just over 38,000, including over 800 officers. During the same four and a half months we captured 29 heavy guns, 96 field guns and field howitzers, 136 trench mortars and 514 machine-guns. All in all there are many good and bad points to the Battle of the Somme but none out do each other with justification, the battle of the Somme was a great tragedy for many men, it caused the loss of many lives and men, armies were weakened and more men called up to have their fate decided for them by war. ...read more.

One particular soldier was running across no mans land with his platoon line attacking the opposing trench, his best friend was running next to him, then another shell went off and a piece of shrapnel blew his friends head off and yet the headless corpse carried on running for about eight feet. The Somme was a battle that had many outcomes: we managed to push the Germans back, we lost many men, we capture many Germans and their weapons, it did not end the war, as far as I can see it had no real effect on the rest of the war, it just lost many numbers from each side. Although we had the more men in that battle I still believe that the Germans were the more dominant side purely because of the first day of the Somme where we lost so much. ...read more.