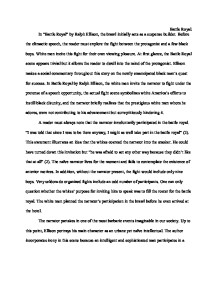 Battle Royal. In "Battle Royal" by Ralph Ellison, the brawl initially acts as a suspense builder. Before the climactic speech, the reader must explore the fight between the protagonist and a few black boys. White men incite this fight for their own viewing pleasure. At first glance, the Battle Royal scene appears trivial but it allows the reader to dwell into the mind of the protagonist. Ellison makes a social commentary throughout this story on the newly emancipated black man's quest for success. In Battle Royal by Ralph Ellison, the white men invite the narrator to fight under the pretense of a speech opportunity, the actual fight scene symbolizes white America's efforts to instill black disunity, and the narrator briefly realizes that the prestigious white men whom he adores, were not contributing to his advancement but surreptitiously hindering it. A reader must always note that the narrator involuntarily participated in the battle royal. "I was told that since I was to be there anyway, I might as well take part in the battle royal" (2). This statement illustrates an idea that the whites coerced the narrator into the smoker. ...read more.

In contrast, the white men view all of them equally; therefore they share the same elevator. "I was shocked to see some of the most important men of the town quite tipsy. They were all there-- bankers, lawyers, judges, doctors, fire chiefs, teachers, merchants. Even one of the more fashionable pastors"(3). This passage displays a repugnant yet, viable social revelation of the author's time period. Ralph Ellison revealed a suppressed notion in black circles that influential white individuals were opposed to black advancement. The battle royal symbolizes a fight incited by whites to hinder black unity. Without unity, oppressed people cannot form an organized and powerful resistance to this oppression. The whites watching this battle royal, all want to keep the black man "in his place". This anti-progress group included distinguished members of society, even a preacher. For decades, this group roamed faceless and nameless. The examples chosen by Ellison are obviously intentional and the author intended to provoke thought. The idea that a minister could be a bigot seemed absurd; therefore, Ellison caused much commotion when he pinpointed the more subtle members of this group. ...read more.

In his mind, the speech would allow the white men to affirm his superiority to the other blacks. "I was seared through the deepest levels of my body to the fearful breath within me and the breath seared and heated to the point of explosion (11). The narrator finally comprehended that the white men were the true hindrance to his advancement. This revelation made him extremely angry and he even tried to topple a drunk out of his chair. Obviously the narrator who "was more afraid to act any other way because they didn't like that at all", has come a long way in this short period. The thought of delivering his speech subdues this newfound animosity towards whites. The author included the battle royal scene to make black men aware of their only adversary. The narrator experiences much affliction to achieve his goal. He entered the hotel with no love for his race but undoubtedly left with more respect for his fellow black man. He empathized with the other blacks because they endured the electric carpet together. Momentarily, the narrator understands that the white men acted not as allies, but opponents in his quest to deliver his speech. Unfortunately, he readily dismisses this awareness and contemplates his all-important speech. ?? ?? ?? ?? ...read more.