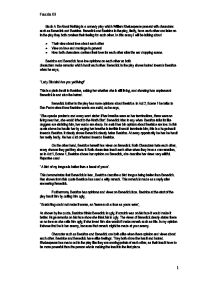 Beatrice and Benedick. Their view about love about each other View on love and marriage in general How both characters confess their love for each other after the ear dropping scene.

Much A Do About Nothing is a comedy play which William Shakespeare present with characters such as Benedick and Beatrice. Benedick and Beatrice in the play, firstly, have each other and later on in the play they both confess their feeling for each other. In this essay I will be talking about * Their view about love about each other * View on love and marriage in general * How both characters confess their love for each other after the ear dropping scene. Beatrice and Benedick have low opinions on each other as both characters make remarks which insult each other. Benedick in the play shows hatred towards Beatrice when he says, ' Lady Disdain! Are you yet living!' This is a plain insult to Beatrice, asking her whether she is still living, and showing how unpleasant Benedick is and also the hatred. Benedick further in the play has more opinions about Beatrice. In Act 2, Scene 1 he talks to Don Pedro about how Beatrice words are awful, as he says, ' She speaks poniards and every word stabs: if her breathe were as her terminations, there were no living near her, she would infect to the North Star'. Benedick tries to say when Beatrice talks its like daggers are stabbing him, her words are sharp. ...read more.

Furthermore, Beatrice has her own opinions on love and marriage. Beatrice is like Benedick because Beatrice doesn't want to get married epically to Benedick. Beatrice makes up excuse as she says, 'a man t a beard is too old for her, And, a youth without a beard would not be interested in her, and she would not be interested in the youth. So basically it an excuse for her because she doesn't want to get married to a youth and a man with a beard wouldn't be old for her. These are the excuses he makes. In Act 1, Scene 1, Beatrice becomes convincing when he says, ' Not till God makes men of some other metal than earth', This shows she wouldn't only marry a man if they were from metal rather than earth. This shows her determination about her not getting married. Beatrice says things very indirectly due to her role, because in the olden days women weren't allowed to be as direct as men, due to a man position would be higher than a lady. Everyone would listen to the man and not the lady, this is shown on the marriage day as the man assumes something, but no one really listens to the lady. Beatrice is clever with her word, she accepts the way she feels and protest against her rights. ...read more.

If thou dost love, my kindness shall incite thee. To bind our loves up into a holy hand, her she confess her love, she wants to get married to him. She would take her hand and bind her love towards Benedick. As shown at the end of the play both characters, Beatrice and Benedick confess their love, both characters love each other deep down, but they don't want to show it. The ear dropping scene shows that there hatred turns into love. If It wasn't for the other character, Beatrice and Benedick wouldn't have confessed their love for each other and they may have shown there hatred. To conclude with this essay, William Shakespeare seems to make both characters hate each other and later have feelings for each other. No matter how much they seem to insult each other, they show their hatred as love. The play as a twist to it as shown in the title, 'Much Ado About Nothing', they make a little fuss for nothing. At the end of the play both characters seem to have got married and still they show their hatred as they have a tough time. Don Pedro was right when he says he would see them both getting married to each other. Although both characters, Beatrice and Benedick, show there love, as a couple they will never be happy, the hatred at the start of the play will show in their marriage. ?? ?? ?? ?? Fauzia Bi 1 ...read more.