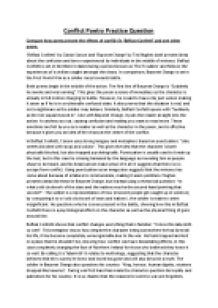 Belfast Confetti by Ciaran Carson and Bayonet Charge by Ted Hughes both present ideas about the confusion and terror experienced by individuals in the middle of violence.

Transfer-Encoding: chunked ﻿Conflict Poetry Practice Question Compare how poets present the effects of conflict in ?Belfast Confetti? and one other poem. ?Belfast Confetti? by Ciaran Carson and ?Bayonet Charge? by Ted Hughes both present ideas about the confusion and terror experienced by individuals in the middle of violence. Belfast Confetti is set in Northern Ireland during a period known as ?The Troubles? and follows the experiences of a civilian caught amongst the chaos. In comparison, Bayonet Charge is set in the First World War as a soldier races towards battle. Both poems begin in the middle of the action. The first line of Bayonet Charge is ?Suddenly he awoke and was running?. This gives the poem a sense of immediacy as the character is already in full motion charging to battle. ...read more.

This gives the idea that the character is both physically blocked, but also trapped psychologically. Punctuation is usually used to break up the text, but in this case he is being harassed by the language surrounding him as people shout to be heard, and his head cannot make sense of it all. It suggests that there is no escape from conflict. Using punctuation as an image also suggests that the violence has come about because of a failure to communicate, making it seem pointless. Hughes presents ideas like these in Bayonet Charge, but instead using a rhetorical question: ?In what cold clockwork of the stars and the nations was he the second hand pointing that second??. The soldier is a representation of how innocent people get caught up in violence; by comparing it to a ?cold clockwork of stars and nations?, the soldier is made to seem insignificant. ...read more.

The soldier in Bayonet Charge also questions his country: ?King, honour, human dignity, etcetera dropped like luxuries?. Facing war first hand has made the character question his loyalty and patriotism for his country. It is so chaotic that the reasons he went to war are forgotten, shown by the word ?etcetera? as he talks about these things as if they no longer matter. He?s been reduced to a basic level, attacking out of desperation and not moral principle. Terror has become the emotion driving him forward rather than a more noble motive. Overall, I believe these poems are trying to show how the effects of war reach everyone, causing confusion and terror especially for those witnessing it first hand. As well as this, both poems show how there are many questions about why conflict even occurs, but that it is likely to be something to continue forever. ...read more.