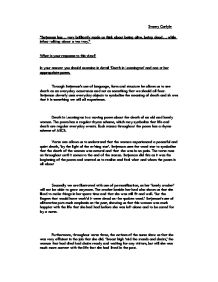 &quot;Betjeman has... very brilliantly made us think about being alive, being dead... while infact talking about a tea tray.&quot; What is your response to this view? In your answer you should examine in detail 'Death in Leamington' and one other appropriate poem.

Stacey Carlyle "Betjeman has... very brilliantly made us think about being alive, being dead... while infact talking about a tea tray." What is your response to this view? In your answer you should examine in detail 'Death in Leamington' and one other appropriate poem. Through Betjeman's use of language, form and structure he allows us to see death as an everyday occurrence and not as something that we should all fear. Betjeman cleverly uses everyday objects to symbolise the meaning of death and shows that it is something we will all experience. Death in Leamington is a moving poem about the death of an old and lonely woman. The poem has a regular rhyme scheme, which may symbolise that life and death are regular everyday events. Each stanza throughout the poem has a rhyme scheme of ABCB. Verse one allows us to understand that the woman experienced a peaceful and quiet death, 'by the light of the ev'ning star'. Betjeman uses the word star to symbolise that the death of the woman was natural and that she was in no pain. The verse runs on throughout until it comes to the end of the stanza. ...read more.

Then she 'turned down the gas in the hall.' And symbolises that her life has come to an end so there is no need for the gas to be switched on full. Through the poem 'Death in Leamington' Betjeman has made me understand and realise that death is an everyday occurrence and cannot be foreseen. His regular rhyming scheme has helped to create the illusion of the rhythm of life, he how it is broken when someone dies, whether it is someone close to you or someone you never knew, it happens in exactly the same way. In this particular poem he illustrated that the nurse still completed everyday tasks even though the woman had died. 'On a Portrait of a Deaf Man' is about John Betjeman's late father. He wrote this poem in his most common way, four-line stanzas. This may have been the case as he was familiar with this style of writing and felt comfortable writing his poetry in this way. As like 'Death in Leamington' it has a regular rhyme scheme of ABCB and again he may have felt most comfortable writing in memory of his father like this. ...read more.

We then learn that his father's death was sudden and unexpected and is therefore demonstrating ambivalent feelings as he feels regret for not saying goodbye. The final verse we see that Betjeman is questioning God's faith. He cannot think that his father is in heaven and he hates to admit that his father is dead, and shows much remorse of not saying farewell. 'You ask me to believe You and I only see decay.' This is a very powerful last line and each of the 'You' words begins in a capital letter as it puts emphasis on him speaking to God and shows that he did not believe in him as he took his father away. Although his body has decayed, he still has memories, but shows slight sadness. Betjeman is very honest about his feelings in this last stanza. Through reading 'On a portrait of a Deaf Man' it has made me realise that death can be very sudden and not to take it for granted. Betjeman made great use of the past to show how intense his feelings are and to show us what he believed in. He wrote briefly about the things that himself and his father liked to do, demonstrating their former everyday life. ...read more.