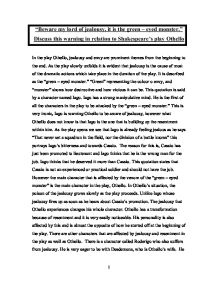 &quot;Beware my lord of jealousy, it is the green - eyed monster.&quot; Discuss this warning in relation to Shakespeare's play Othello

"Beware my lord of jealousy, it is the green - eyed monster." Discuss this warning in relation to Shakespeare's play Othello In the play Othello, jealousy and envy are prominent themes from the beginning to the end. As the play slowly unfolds it is evident that jealousy is the cause of most of the dramatic actions which take place in the duration of the play. It is described as the "green - eyed monster." "Green" representing the colour o envy, and "monster" shows how destructive and how vicious it can be. This quotation is said by a character named Iago. Iago has a strong manipulative mind. He is the first of all the characters in the play to be attacked by the "green - eyed monster." This is very ironic, Iago is warning Othello to be aware of jealousy, however what Othello does not know is that Iago is the one that is building up the resentment within him. As the play opens we see that Iago is already feeling jealous as he says "That never set a squadron in the field, nor the division of a battle knows" this portrays Iago's bitterness and towards Cassio. The reason for this is, Cassio has just been promoted to lieutenant and Iago thinks that he is the wrong man for the job. Iago thinks that he deserved it more than Cassio. This quotation states that Cassio is not an experienced or practical soldier and should not have the job. ...read more.

Even Iago says "As honest as I am" which is also very ironic for the same reason. Iago's jealousy drives him wild literally. Out of this jealousy, Iago tells Roderigo that Desdemona is in love with Cassio. He does this start off his scheming, "Desdemona is directly in love with him" this is Iago referring to Cassio whilst talking to Roderigo. This causes jealousy to catch on to Roderigo as well. Now that Roderigo thinks that Desdemona is after Cassio, he feels envy towards Cassio. This is the first example which shows that jealousy is like a "web" or a "mesh" as Iago describes it. People are getting caught up in the web of jealousy, and is almost as if the jealousy is contagious. Iago expresses his jealousy with Cassio very deceitfully. He makes Cassio drunk by making him drink to his promotion. Cassio refuses at first, but Iago uses his skilled methods and persuasive manner to make Cassio drink until he is drunk. Here Iago calls for help, knowing that Othello will come. When Othello sees Cassio in such a state, he is entitled to take away his promotion. "Thy honesty and love doth mince this matter." This is exactly what Iago wanted. And is one of the disastrous tragic consequences of jealousy. After this, Cassio still refers to Iago as "honest" which shows that Cassio has no idea that Iago is the character scheming his fall. Now that Cassio has lost his position as Lieutenant, Iago is satisfied and schemes to bring Othello to the same sort of break down. ...read more.

Earlier on in the play, if Iago was to say such a comment, the thought of his wife being unfaithful to him would not have occurred to his mind; however it is clear and evident that Iago has had a substantial effect on him. Othello becomes mentally distraught and anxious. He starts to think of ways to kill her. This is a major element of the play. "For she shall not live". Othello says this in reference to Desdemona, and he also says "I will chop her into messes." This is all a results of Iago's evil scheming. This is the effect that is a consequence of the jealousy created by Iago. Eventually, Othello "smother" Desdemona with the pillow to death. This is the main tragic consequence of the jealousy. In conclusion, it is fair to say that Iago did "enmesh" the characters in his net of jealousy and did so successfully. However, Iago's lies caught up to him, as in the end, Othello knew what he had done, as he "strikes" Iago. He used carefully structured sentences to achieve this. "Ha. I like not that" is a very good example of this. It is clear that Iago is also capable of portraying what he wants in what ever character he pleases to do so in. he uses evidence that is not proper proof and makes it seem as real as reality. And example of this is "the handkerchief." After noticing what jealousy is capable of, it is clear why Iago says that jealousy is a "green - eyed monster." Jealousy did not only acquire dead bodies like Desdemona, but ruined the true love that Desdemona and Othello shared. 1 ...read more.