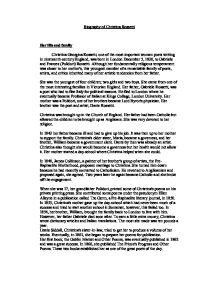 Biography of Christina Rossetti Her life and family Christina Georgina Rossetti, one of the most important women poets writing in nineteenth-century England, was born in London December 5, 1830, to Gabriele and Frances (Polidori) Rossetti. Although her fundamentally religious temperament was closer to her mother's, this youngest member of a remarkable family of poets, artists, and critics inherited many of her artistic tendencies from her father. She was the youngest of four children; two girls and two boys. She came from one of the most interesting families in Victorian England. Her father, Gabriele Rossetti, was a poet who had to flee Italy for political reasons. He fled to London where he eventually became Professor of Italian at Kings College, London University. Her mother was a Polidori, one of her brothers became Lord Byron's physician. Her brother was the poet and artist, Dante Rossetti. Christina was brought up in the Church of England. Her father had been Catholic but allowed the children to be brought up as Anglicans. She was very devoted to her religion. In 1843 her father became ill and had to give up his job. It was then up to her mother to support the family. Christina's older sister, Maria, became a governess, and her brother, William became a government clerk. Dante by then was already an artist. Christina also thought she would become a governess but her health would not allow it. ...read more.

Her brother, Dante, died in 1882. And, in 1886, her mother died. After this, Christina cared for two elderly aunts until they died. She didn't publish any more poetry but did continue to write. In 1891, Christina was considered to replace Alfred, Lord Tennyson, as poet laureate. However, she developed a fatal cancer. She was operated on successfully in 1892. She lived the next two years of her life as an invalid and died on December 29, 1894. Her poems Partly because of her shyness and partly just because she was a woman, Christina Rossetti was never completely a part of the Pre- Raphaelite Brotherhood. Nevertheless, her Goblin Market and Other Poems (1862) was the first unalloyed literary success the Brotherhood enjoyed, and there is a loose parallel between her fondness for the rhythms of folk songs and the Pre-Raphaelite interest in things medieval. Since she began with such success, both her brother and her publisher were eager that she follow it up at once, but her next volume of poetry, The Prince's Progress and Other Poems, was not ready until 1866. It sold well, but the critics saw at once that the best poems in it were not quite the equal of the best in her first collection. In fact, "Goblin Market," one of her first poems, remains her best. Themes of frustrated love and an understated tension between desire and renunciation characterise her more serious work. ...read more.

At such times she would long for release and find no magic even in the spring; I wish I were dead, my foe, My friend, I wish I were dead, With a stone at my tired feet With a stone at my head. In the pleasant April days Half the world will stir and sing, But half the world will slug and rot For all the sap of Spring Much of Christina Rossetti's poetry is filled with a homesick love of spring, the season of a promise ever lovelier than its own fulfilment. Longing for "the limpid days" There is no time like Spring, Like Spring that passes by; There is no life like Spring life born to die,- Piercing the sod, Clothing the uncouth clod, Hatched in the nest, Fledged on the windy bough, Strong on the wing: There is no time like Spring that passes by, Now newly born, and now Hastening to die. There, for Christina, lies one of the central human tragedies. We let youth slip from us regardless of its treasures; the theme of lost opportunity, of joys unvalued until they have been snatched away forever, runs through the poems from The Prince's Progress onwards. Obvious themes for Goblin Market might be "that one should be careful of temptation," or "that little girls should not talk to strange men." One might even go on to the end of the poem and decide the theme is "that sisters should love one another. ...read more.