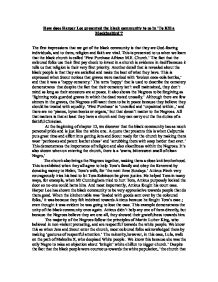 Black Community in 'To Kill a Mockingbird'

How does Harper Lee presented the black community to us in 'To Kill a Mockingbird'? The first impressions that we get of the black community is that they are God-fearing individuals, and to them, religion and faith are vital. This is presented to us when we learn that the black church is called 'First Purchase African M.E. Church.' The fact that the coloured folks use their first pay check to invest in a church is evidence in itself because it tells us that religion is their very first priority. Another detail that is revealed about the black people is that they are satisfied and make the best of what they have. This is expressed when Scout notices that graves were marked with 'broken coca-cola bottles,' and that it was a 'happy cemetery.' The term 'happy' that is used to describe the cemetery demonstrates that despite the fact that their cemetery isn't well maintained, they don't mind as long as their ancestors are at peace. ...read more.

And most importantly, Atticus fought his court case. Harper Lee has shown the black community to be very appreciative towards people that do them good. When the kitchen table was 'loaded with goods sent over by the coloured folks,' it was because they felt indebted towards Atticus because he fought Tom's case ; even thought it was evident he was going to lose the case. This example demonstrates the unity of the black community once again. Atticus didn't help any one of them directly, but because the Negroes believe they are one all, they showed their gratefulness towards him. The majority of the Negroes follow the principles of Martin Luther King, who believed in non-violent protesting, and are respectful towards the white people. We know this as when Jem and Scout enter the church, most coloured folks acknowledged them by making 'gestures of respectful attention.' The minority,however, in this case, Lula, walk on the path of Malcolm X, who despised White people . ...read more.

They happily live their lives, but still are prejudiced and are treated with great disregard and impudence. Harper Lee has presented the black community to us so that they play a major role in contributing to the main theme in 'To Kill a Mockingbird' of appearance and reality. From the white community's viewpoint, the Negroes are inferior to the rest of the county. They are percieved as low class and are discriminated against purely because of the colour of their skin. But in reality, they are as Christian at heart as the white community, if not more, in comparison to the Ewells.They are magnanimous, have good intentions and are hard working, making sure they give their best to whatever they do. In almost every novel, there are two main groups each character belongs to : the villains and the victims, who ultimately become the heroes. In this particular novel, Harper Lee has made the majority of the white community, with exceptions, the Villains or the people that do the action, and the black community the victims or the people that suffer the action and in this case, the action is racism or prejudice. ...read more.