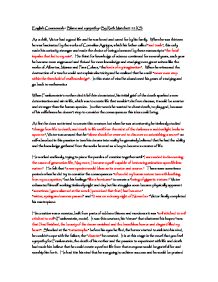 English Coursework~ Blame and sympathy~ By Ruth Matchett 12 KS As a child, Victor had a good life and he was loved and cared for by his family. When he was thirteen he was fascinated by the works of Cornelius Agrippa, which his father called "sad trash", this only made his curiosity stronger and made the choice of being obsessed by these manuscripts "the fatal impulse that led to my ruin". His thirst for knowledge of science continued for several years, each year he became more engrossed and thrived for more knowledge and studying more great writers like the works of Albertus, Manus and Para Celsus, "the lords of my imagination". When he witnessed the destruction of a tree he could not explain electricity and he realized that he could "never even step within the threshold of real knowledge". In this state of mind he abandoned his years of studying and go back to mathematics When Frankenstein's mother died it left him devastated, his initial grief of the death sparked a new determination and aim in life, which was to create life that wouldn't die from disease, it would be smarter and stronger than the human species. In other words he wanted to cheat death, to play god, because of his selfishness he doesn't stop to consider the consequences this idea could bring. At first he does not intend to create this creature but when he was at university he tirelessly studied "change from life to death, and death to life until from the midst of the darkness a sudden light broke in upon me", Victor was amazed that ...read more.

misery" although there is some compassion inside the creature there is some early warning signs that this rage is now becoming uncontrollable "for the first time the feelings of revenge and hatred filled my bosom, and I did not strive to control them." He takes his anger out on "inanimate objects". So he burns down the cottage, symbolically unleashing the fire within him but yet almost in a childish tantrum. Now our sympathy towards the creature wavers. He regains his compassion when he saves the life of a young girl, but again he is rewarded by hatred, he is shot and at this point "vowed eternal hatred and vengeance to all mankind." He then desires to take revenge for his suffering he strives to find a companion, someone young who will not be bias toward him; he stumbles upon a young boy and naively thinks that he will willingly become his companion because of his age. When the boy verbally abuses him he finds out that he is indeed related to Frankenstein and so he thinks by murdering his relative he is one step closer to full revenge toward Victor " I gazed on my victim and my heart swelled with exultation and hellish triumph, I too, can create desolation; my enemy is not vulnerable, this death will carry despair to him and a thousand other miseries shall torment and destroy him" The creature plots to seek more revenge on Victor and so plants evidence on a close friend, Justine, so that she will be executed. ...read more.

The build up of his emotions finally give way as he turns to seek revenge on frankenstine when he discovers his origons. When his only means of eternal happiness is dramatically taken from him he murders " the lovely and the helpless; I have strangled the innocent as they slept." He finally admits that all this evil that he had committed did not satisify him and that he is "wretched". The creature wins the readers sympathy when he tells his moving story about his sensitivity and emotional scarring but all that sympathy drastically decreases as his anger his boiling point and he murders frasnkenstines younger brother out of revenge. Throughout the bad times I think that we always have a small sence of sympathy towards the creature as he is expelled from human contact because of his "deformity". His kind actions were always thrown back in his face and overall he did not lead a very enjoyable life. When Frankenstein was a young boy he described himself, saying: "My temper was sometimes violent, and my passions vehement" whish suggests to the reader that the two characters were both more similar than it seems. In conclusion I feel that they were both as evil as each other. The creature and Frankenstein can both be considered as being thoughtless and evil, since they did not have any thought towards anyone who may be harmed for them to achieve success. No-one deserves more sympathy than the other as Frankenstein was to blame for the monsters unhappiness and the monster for Victor's. ...read more.