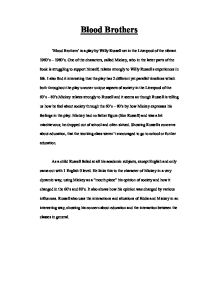 Blood Brothers 'Blood Brothers' is a play by Willy Russell set in the Liverpool of the vibrant 1960's - 1980's. One of the characters, called Mickey, who in the latter parts of the book is struggling to support himself, relates strongly to Willy Russells experiences in life. I also find it interesting that the play has 2 different yet parallel timelines which both throughout the play uncover unique aspects of society in the Liverpool of the 60's - 80's.Mickey relates strongly to Russell and it seems as though Russell is telling us how he feel about society through the 60's - 80's by how Mickey expresses his feelings in the play. Mickey had no father figure (like Russell) and was a bit mischievous; he dropped out of school and often skived. Showing Russells concerns about education, that the working class weren't encouraged to go to school or further education. As a child Russell failed at all his academic subjects, except English and only came out with 1 English 0 level. He links this to the character of Mickey in a very dynamic way, using Mickey as a "mouth piece" his opinion of society and how it changed in the 60's and 80's. It also shows how his opinion was changed by various influences. Russell also uses the interactions and situations of Eddie and Mickey in an interesting way, showing his concern about education and the interaction between the classes in general. ...read more.

almost as though she sees Mrs Johnston as mentally impaired, it could also be an insult. Furthermore the fact that Mrs Johnston doesn't even dare speak to the police woman suggests she's scared of her, which in turn implies that Mrs Johnston is treated regularly like this by the police woman and possibly other officers of the law. This would shock a modern audience as we see police officers as polite, decent people and in my opinion this shock would further emphasise Russells point. However in the extract when she's talking to Mrs Lyons she describes the incident as "it was more of a prank really" which contrasts with the fact that to Mrs Johnston she describes it as "a serious crime, love a serious crime." Showing how the rich at the time could possibly have even used there money and influence to decide the outcome of court cases, or to avoid a court case altogether. And when she speaks to Mrs Lyons in the first extract she seems nervous "Well, er thanks for the drink. All the best now. Tarar." This is almost a complete reversal of roles, when previously the police officer dominated the conversation, she's now nervous and Mrs Lyons hadn't even spoken. Showing that when Mrs Lyons asked Mrs Johnston for the baby Mrs Johnston didn't stand a chance, this highlights to the audience just how dominating Mrs Lyons is, as even the police woman (a figure of authority) ...read more.

Constantly through the play Miss Lyons and Eddies influence and power are highlighted. Their power is highlighted by various scenes when Mrs. Lyons their power is highlighted by various scenes for example when Mrs Lyons shoves money in Mrs Johnston's hands.In this scene Mrs John stone is powerless to resist Mrs Lyons. She's so tempted by the money, but why? Because to her these scraps of paper represent power, she feels they've been given some of Mrs Lyons power. In my opinion this is Russell saying that the upper class have all the power and that with this 'power' they can bend the working class to there will and keep them in this viscous circle of poverty. So in conclusion, Russell shows us that; * He relates strongly to the character of Mickey and quite possibly uses him as a mouth piece for his opinions and his experiences in life. * He's warning us about the prejudice displayed towards the working class in the 60s -80s * Warning about the power the upper class has and how they can influence important events ( court cases) and forge documents (papers for the baby) * The lack of communication and the gap between the classes * That the working class have less opportunity's than the upper class * That the working class aren't encouraged to go to school or further education so... * The rich get richer and the poor get poorer. ...read more.