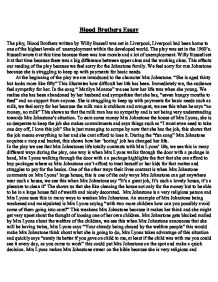 Blood Brothers. In the play we see that Mrs Johnstones life totally contrasts with Mrs Lyons life, we see this in many different ways during the play,

Blood Brothers Essay The play, Blood Brothers written by Willy Russell was set in Liverpool, Liverpool had been home to one of the highest levels of unemployment within the developed world. The play was set in the 1960's. Russell wrote it at this time because there was low morale and a lot of unemployment. Willy Russell set it at that time because there was a big difference between upper class and the working class. This affects our reading of the play because we feel sorry for the Johnstone family. We feel sorry for mrs Johnstone because she is struggling to keep up with payments for basic needs. At the beginning of the play we are introduced to the character Mrs Johnstone. "She is aged thirty but looks more like fifty" This illustrates how difficult her life has been. Immediately we, the audience feel sympathy for her. In the song " Marilyn Monroe" we see how her life was when she young. We realise she has been abandoned by her husband and sympathise that she has, "seven hungry mouths to feed" and no support from anyone. She is struggling to keep up with payments for basic needs such as milk, we feel sorry for her because the milk man is stubborn and arrogant, we see this when he says "no money, no milk" This shows us that the milk man has no sympathy and is not being very understanding towards Mrs Johnstone's situation. ...read more.

We see this when Mickey says to Edward "if our Sammy gives y' a sweet he's usually wee'd on it first" we see it here because that is how Mickeys lifestyle is where as Edward has a very high quality lifestyle. There is a large difference between the use of language between Mickey and Edward, this is because Mickey has been brought up around a family that is struggling with most payments where as Edward has been brought up with good education. We see this when Mickey says to Edward "do you know the 'F' word?" Edward is puzzled and says "pardon?" this shows that Edward doesn't know any 'naughty' words where as Mickey knows just about every bad word in the book. The difference in the quality of language between the two also shows the difference in the quality of education they have had, we see this quite a lot through out the play because Mickey will use slang, this shows a poor quality of education where as Edward uses a quality of language which is very formal, this shows he has gone to a very good school or possibly even private school. We see Mickey using 'slang' most of the way through play, an example of this is when he says "cos me mam says" where as Edward would of said something along the lines of "because my mummy / mother says" this shows that Mickey is very informal in the use of his language. ...read more.

We realise that Mickey and Linda's relationship becomes full of arguments, they are always arguing about petty little things and this makes the relationship quite un-successful, we see this when Mickey and Linda are arguing about Mickey's tablets, we also see it when Mickey mentally abandon's Linda, she feels as if she is being blocked out of Mickey's life. The relationship between Mickey and Linda seems to be slowly breaking down, we see this when they both drift away from each over, we see this hen Linda wants to meet up with Edward to talk, they eventually kiss and walk off together hand in hand, this shows that Linda thinks just as much about Edward as she does about Mickey. I think Willy Russell has done very well to present two contrasting worlds, he shows us the many difference's between the two family's. We see this in many ways and Russell has used many effective terms to make us recognise this. The many effective terms he has used has provoked many different thoughts into our heads and he has made his style of writing very catchy. I think his style of writing is very successful because as we are reading the story we can almost visualise what is happening in the story. ...read more.