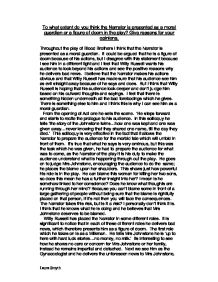 To what extent do you think the Narrator is presented as a moral guardian or a figure of doom in the play? Give reasons for your opinions. Throughout the play of Blood Brothers I think that the Narrator is presented as a moral guardian. It could be argued that he is a figure of doom because of his actions, but I disagree with this statement because I see him in a different light and I feel that Willy Russell wants his audience to look beyond his actions and see the positive reasons why he delivers bad news. I believe that the Narrator makes his actions obvious and that Willy Russell has made sure that his audience see him as evil straight away because of he says and does. But I think that Willy Russell is hoping that his audience look deeper and don't judge him based on his outward thoughts and sayings. I feel that there is something hidden underneath all the bad forebodings which he gives. There is something else to him and I think this is why I can see him as a moral guardian. From the opening of Act one he sets the scene. 'He steps forward and starts to recite the prologue to his audience. ...read more.

Could he have come from a higher power? Could he be seen as an angel? I think later on in the play we find the answers to these questions. After Mrs Lyons goes back on her promise to Mrs Johnstone, the Narrator is seen again. This time he starts to sing a song which contains very disturbing lyrics. 'Now y'know the devil's got your number, He's gonna find y'... He's knocking at your door.' These lyrics most certainly present him as a figure of doom. He builds up the tension of this scene and Willy Russell effectively uses him as a dramatic device to engage the interest of the audience. He creates tension and fear through this song amongst the audience and we expect the worst. I know that this song definitely casts him in a negative light, but we can see the nod to religion here again. He sings about the 'devil' and how he is after both Mrs Johnstone and Mrs Lyons, this is out of character for 'a devil' and I feel that something is not right. If we were to assume that the Narrator is from a higher power then it would be him who would be after Mrs Johnstone and Mrs Lyons for what they have done, but instead he sings about the devil. ...read more.

If this is the case, then I have a theory, which I know a lot of people wouldn't agree with. I think that it's possible that the Narrator is never there. I mean that yes of course the audience can see him, but can the other characters see him when he is himself? I think he might only be the conscience of the characters, because they never interact with him and it's true that after he has spoken that they are scared, but does he speak in their mind? Is he just their conscience or in other words their moral guardian? They both do the same job, they both disapprove of something wrong and this is why I definitely think the Narrator is a moral guardian or possibly an angel. He didn't approve of the pact which was made, he predicted it would bring pain and suffering and he was right. He did not feel pity for those who made the pact, but for those who suffered because of it. In my eyes he redeemed himself and I believe he was only trying to teach the characters a lesson, even though he knew he couldn't prevent their fate. I think if you look behind the hard exterior you see someone who only wanted to show the characters the danger of their actions and their behaviour. He knew not to mess with fate. ?? ?? ?? ?? Laura Smyth ...read more.