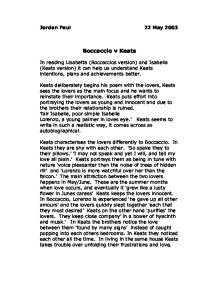 Jordan Paul 22 May 2003 Boccaccio v Keats In reading Lisabetta (Boccaccios version) and Isabella (Keats version) it can help us understand Keats intentions, plans and achievements better. Keats deliberately begins his poem with the lovers, Keats sees the lovers as the main focus and he wants to reinstate their importance. Keats puts effort into portraying the lovers as young and innocent and due to the brothers their relationship is ruined. 'fair Isabelle, poor simple Isabelle Lorenzo, a young palmer in loves eye.' Keats seems to write in such a realistic way, it comes across as autobiographical. Keats characterises the lovers differently to Boccaccio. In Keats they are shy with each other. 'So spake they to their pillows.' ...read more.

In Keats they noticed each other all the time. In living in the same house Keats takes trouble over unfolding their frustrations and love, for there is not much they can do (autobiographical). We now start to care about them. Both know the danger of the lovers class difference, but the fact that they cant be together seems to fuel their lust. 'Even bees knows there is richest juice in poison flowers' Another big difference between the poems is the concentration put towards the brothers. In Keats the brothers are introduced late on and the characteristics have been moulded around evil. In Boccaccio the brothers are introduced at the very beginning of the poem and their decision about killing Lorenzo is more to do with wanting the sister to be happy without consulting the sister. (In Keats) ...read more.

Lorenzo is a 'youngster' he is 'flush with love'. We overhear their final conversation when Isabella has a 'laugh full musical aloft' they are opposed by the brothers 'serpents wine' This is referring to the garden of Eden and the serpent being the devil. During the killing of Lorenzo there is no macabre detail or in the finding of the body 'at the old tale take a glance' whereas Boccaccio went into grotesque detail. To reiterate Isabella's undying love for Lorenzo, her clinging love is portrayed as she combs the skulls hair and eyelashes. I personally think this is very grotesque 'pointed each fringed lash' Though I believe Keats wants us to see it as a touching detail. In comparison to Boccaccio and how all the neighbours notice how well the plant grows in which she had previously buried the head, Keats completely leaves the neighbours interference out. Instead concentrates on the love triangle only. ...read more.