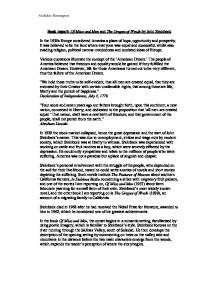 Book report: Of Mice and Men and The Grapes of Wrath by John Steinbeck

Book report: Of Mice and Men and The Grapes of Wrath by John Steinbeck In the 1930s Europe considered America a place of hope, opportunity and prosperity. It was believed to be the land where everyone was equal and successful, whilst also evading religion, political narrow-mindedness and outdated ideas of Europe. Various quotations illustrate the concept of the 'American Dream.' The people of America believed that freedom and equality would be gained if they fulfilled the American Dream. However, life for those Americans turned out to be very different, thus the failure of the American Dream. "We hold these truths to be self-evident, that all men are created equal, that they are endowed by their Creator with certain unalienable rights, that among these are life, liberty and the pursuit of happiness." Declaration of Independence, July 4, 1776 "Four score and seven years ago our fathers brought forth, upon this continent, a new nation, conceived in liberty, and dedicated to the proposition that 'all men are created equal.' That nation, shall have a new birth of freedom, and that government of the people, shall not perish from the earth." Abraham Lincoln In 1929 the stock market collapsed, hence the great depression and the start of John Steinbeck's career. This was due to unemployment, strikes and wage cuts by modern society, which Steinbeck was at liberty to witness. Steinbeck was experienced with working on cattle and fruit ranches as a boy, which were severely effected by the depression. He could only sympathise and relate to the millions of people who were suffering. ...read more.

A heavy pistol holster hung on a cartridge belt around his waist. On his brown shirt a deputy sheriff's star was pinned." The way in which Steinbeck writes like this not only depicts the immoral and treacherous characters it also helps the reader understand what each character is thinking by sympathising with the characters. This was shown when Candy's Sheepdog in Of Mice and Men is shot after Candy's close work colleagues almost 'gang up on' him to have it killed for it's own good. The reader sympathises with Candy when he looks around the room at each friend, trying to find hope that they agree with him, to keep the dog alive and after the gun fire is heard the reader sympathises with Candy's mourning silence. "A shot sounded in the distance. The men looked quickly at the old man. Every head turned toward him. "For a moment he continued to stare at the ceiling. Then he rolled slowly over and faced the wall and lay silent." Steinbeck doesn't use sympathy to portray the characters in The Grapes of Wrath as well. Although both Grandpa, Grandma and Rose of Sharon's miscarried baby die there is too many other obstacles facing the family at the same time, so the reader doesn't completely understand the family's reaction to each death. In Of Mice and Men my most liked character is George. I have a great amount of respect for him for the amount of patience he has with Lennie, which I don't think I could have myself. ...read more.

The owners of the Caf� comment on the lack of business the migrants bring. However, the owners actually feel pity for the migrants and this is expressed when one of the owners sells a migrant some sweets for his children for a reduce price. Although when the owner is confronted about why she did that she tries to continue to comment on the migrants uselessness, when it is clear she doesn't really believe what she says, she is just saying it for present company. I enjoyed both the books I read, because of the ideas, issues and principles behind Steinbeck's themes. Each issue and problem the characters in each story had to over come were thought provoking, and I think I would have dealt with the problems in the same way. I think these books appeal to people with political knowledge and who like reading about people faced with difficulties. Although I liked both the books, for their political and human side I think I enjoyed the human aspects of the books more. Therefore I enjoyed The Grapes of Wrath more due to its involvement with the characters. The climax of Of Mice and Men wasn't as effective as it could have been if the reader was more familiar to the relationship with George and Lennie, then the reader would have understood George's difficulty of killing his best and closest companion. The Grapes of Wrath lets you know the characters, to a certain extent that when the story ends and the family hasn't found happiness in California, the reader continues to think about if they ever will. I am sure to read The Grapes of Wrath again. ...read more.