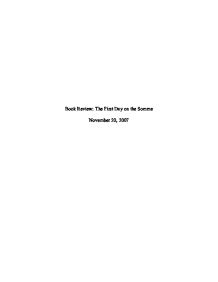 Book Review: The First Day on the Somme November 20, 2007 On July 1 1916, in one of the largest military operations to ever be executed, the British army entered into the bloodiest battle it has ever known. This was the battle of the Somme, a conflict that is etched into the collective memory of Britain as a tragedy. The first day on the Somme, the focus of this book, saw the loss of nearly 60,000 British troops, the largest loss in a single day in all of British History. Martin Middlebrook investigates, in depth, the events and circumstances that led to such a battle, and such an outcome, with regards to the British involvement. Through close examination of diaries and official records, as well as a wealth of interviews and correspondence with actual soldiers who experienced the battle first hand, Middlebrook takes us from the the evening before the attack to several days after the attack in excruciating detail with the personal narratives of those who were there. He analyzes the actions of all parties connected to the battle, from the infantryman to the general to the politician in London. Before Middlebrook describes the day of July 1, he provides the reader with a mass of background information to help understand why the battle went the way it did. ...read more.

The destruction of the barbed wire required a very accurate and precise artillery attack, especially when using shrapnel shells, and this was not achieved. On top of that, a large number of shells did not explode. Men reported seeing hundreds of unexploded shells strewn across the battlefield. The second great mistake, from Middlebrook's point of view, was the exclusion of troops to secure German trenches immediately after the shelling stopped. This could stem from Rawlinson's overconfidence in the artillery. If key positions were attacked before the Germans had time to prepare their defenses, British troops could have quickly gained an advantage over the Germans. Middlebrook argues that Rawlinson had little faith in new army soldiers, and that he thought a rushing attack would be to complicated and confusing for them to execute. Instead, it was ordered that the men should adhere to the rigid wave system. Men, loaded with a large amount of equipment, walked in lines across open ground with German machine gunners directly in front of them. Middlebrook says "It was the senselessness of sending up to eight waves of heavily laden men across open ground, without any sort of advance guard, that caused a high portion of the casualties" (280) ...read more.

A feature of the book that I found especially insightful and compelling was the inclusion of the perspective of German military personnel. Throughout the narrative of the text, Middlebrook quotes German soldiers with the same manner he quotes British soldiers. Understandably, the British offering far outweighs the German, but the inclusion at all is refreshing. The reader is shown the fundamental similarities between sides and is given a broader understanding of humanity in war. In the end, the goal of this book is to explore if the first day was a success and if the battle as a whole was worthwhile. Middlebrook looks at Haim's original objectives to determine what might mean. "The French were relieved from defeat at Verdun; the positions held by the Allies at the end of battle were better than on 30 June; Losses were inflicted on the Germans." (289) But, as Middlebrook states "the British assault had been on such a scale that success, in this limited sense, had been inevitable. The terrible losses made it a success hardly worth having" (290) This book provides the reader with a clear view not only of a single battle, but of the elements of the British army in 1916. Most importantly, it gives the reader a glimpse into the mind of the soldiers who fought in that battle and that army. It is a powerful piece of literature that is both enlightening and engaging. ...read more.