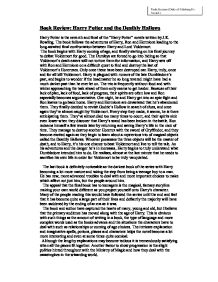 Book Review: Harry Potter and the Deathly Hallows Harry Potter is the seventh and final of the "Harry Potter" novels written by J.K. Rowling. The book follows the adventures of Harry, Ron and Hermione leading to the long-awaited final confrontation between Harry and Lord Voldemort. The book begins with Harry coming of age, and finally starting on his final journey to defeat Voldemort for good. The Dursleys are forced to go into hiding so that Voldemort's death eaters will not torture them for information, and Harry sets off with Ron and Hermione on a difficult quest to find and destroy the last of Voldemort's Horcruxes. Only once these have been destroyed can Harry, truly, once and for all kill Voldemort. Harry is plagued with rumors of the late Dumbledore's past, and begins to wonder if the headmaster he so long revered might have had a much darker past than he ever let on. ...read more.

They manage to destroy another Horcrux with the sword of Gryffindor, and they become excited again as they begin to learn about a mysterious trio of magical objects called the Deathly Hallows. Whoever possesses the three objects will be the master of death, and to Harry, it's his one chance to beat Voldemort and live to tell the tale. As his adventures and the danger he's in increases, Harry begins to truly understand what Dumbledore intended him to do. He realises, almost at the last minute that he needs to sacrifice his own life in order for Voldemort to be truly vanquished. The last book is definitely noticeable as the darkest book of the series with Harry becoming a lot more mature and taking the step from being a teenage boy to a man. He has new, more advanced troubles to deal with and more important choices to make which affect not just him, but the people around him. ...read more.

Although the lengthy explanations may become tedious it is tremendously satisfying when all the pieces fit together. Another factor to show progression is the slight politics hinted throughout with the Ministry of Magic and how they deal with the catastrophes in the wizarding world. With the numerous deaths in the novel the book is also one of the most emotionally trying for anyone so attached to the characters in that they live their lives around the book and it is acceptable, only in the last book as it would certainly have been much too heavy for any of the previous books. Though, still shocking and fast paced towards the end the tragedies and clues hit the reader like a brick wall as it doesn't previously hint anything which some readers may find frustrating. A very enjoyable book which didn't leave me disappointed, but satisfied with the "happily ever after" ending. ...read more.

This is a competent account of the book, but rather lightweight and short for a GCSE assignment. I see that it was a Duke of Edinburgh award submission and that might explain the disparity. The introduction is brief but adequate; the summary of the plot is good but there is very little analysis.

Paragraph construction is quite good, though not clearly or consistently marked and sentence construction and lexis are well up to the task.