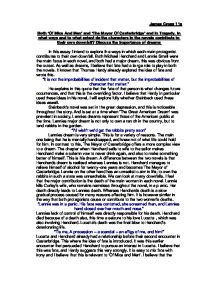 Both 'Of Mice And Men' and 'The Mayor Of Casterbridge' end in Tragedy. In what ways and to what extent do the characters in the novels contribute to their own downfall? Discuss the importance of dreams

James Cross 11s Both 'Of Mice And Men' and 'The Mayor Of Casterbridge' end in Tragedy. In what ways and to what extent do the characters in the novels contribute to their own downfall? Discuss the importance of dreams In this essay I intend to explore the ways in which each main protagonist contributes to their own downfall. Both Michael Henchard and Lennie Small were the main focus in each novel, and both had a major dream, this was obvious from the outset. As well as dreams, I believe that fate had a large role to play in both the novels. It known that Thomas Hardy already explored the idea of fate and wrote this. "It is not the improbabilities of incident that matter, but the improbabilities of character that matter." He explains in this quote that the fate of that person is what changes future occurrences, and that this is the overriding factor. I believe that Hardy in particular used these ideas in his novel, I will explore fully whether Steinbeck used these ideas aswell. Steinbeck's novel was set in the great depression, and this is noticeable throughout the story. And is set at a time when 'The Great American Dream' was prevalent in society, Lennies dreams represent those of the American public at the time. Lennies major dream is not only to own a ranch in the country, but to tend rabbits in the garden. "I'd wish't we'd get the rabbits pretty soon" Lennies dream is very simple. ...read more.

So the death of the dog being so close to when he was panicking over Curley's wife's hair, contributes to the panic and anger, which caused him to kill her, and cause his own demise. Yet again we find out that Lennies mental state and how he loves to pet things contributes to his downfall, it is also his strength that kills the puppy itself. However in The Mayor of Casterbridge it is not Henchard's strength that is a problem, but his decision to hire Donald Farfrae, who was on his way to America. Henchard quickly changed his mind and employed him, as he was an excellent businessman. The rewards of his work soon came through, but after Henchards past was brought to public attention, the townspeople looked to Farfrae to become Mayor and gain their trust. If Henchard had not employed Farfrae, then the townspeople would have no one to look to place their trust and respect. So by employing Farfrae he had given himself an enemy, without him the townspeople would not have found a better man than Henchard to be Mayor. When Susan and Elizabeth Jane return to Weydon-Priors, and ask the furmity woman if she knows where Michael Henchard went after he sold them in the drunken auction, this conversation leads to Henchards past leaking out. As it is ironic how at this point she does not know much about his whereabouts or stature, but soon she causes him to lose his reputation and position within Casterbridge. ...read more.

When Henchard made Farfrae stay in Casterbridge, he helped the town out of the crisis they were in. Henchard just made the mistake of thinking he was above Farfrae as the Mayor, but as it shows the mob rules, and the townspeople over through Henchard for the better businessman. In conclusion both novels show us two characters with dreams and hopes, which are in the end unfulfilled, but they go about striving for these dreams, because of many reasons, in very different ways. Of Mice and Men tells of the American depression and a simple migrant worker called Lennie, whose strength, mental disability, dependence on his friend and lack of ability to deal with the 'bad things' he has done cause his life to end in Tragedy. The Mayor of Casterbridge is set in the fictional town of Casterbridge and tells of a man who worked himself out of his terrible drunkard state and made something of himself, only to in the end have lost the people he loved, become bankrupt, and died a lonely man. I have shown how both characters contribute to their own tragedy, and how Lennie held an unrealistic dream, which he couldn't achieve, while Henchard accomplished his dream but was unable to hold onto it. Finally I believe that if fate is blamed for the characters lives, and that if everyone's life is predetermined, then any responsibility is taken off the person whose life it is; blaming fate is taking the easy way out and people should take responsibility for their actions. ...read more.