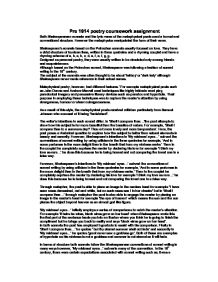 Both Shakespearean sonnets and the lyric verse of the metaphysical poets used a formal and conventional structure. However the metaphysics manipulated the form of their verse

Pre 1914 poetry coursework assignment Both Shakespearean sonnets and the lyric verse of the metaphysical poets used a formal and conventional structure. However the metaphysics manipulated the form of their verse. Shakespeare's sonnets based on the Petrachen sonnets usually focused on love. They have a strict structure of fourteen lines, written in three quatrains and a rhyming couplet and have a rhyming scheme of a, b, a, b, c, d, e, f, e, f, g, g. Designed as personal poetry, they were usually written to be circulated only among friends and acquaintances. Although based on the Petrachen sonnet, Shakespeare was following a fashion of sonnet writing in the 16th century. The subject of the sonnets was often thought to be about 'fairboy' or 'dark lady' although Shakespeare never made reference to their actual names. Metaphysical poetry, however, had different features.' For example metaphysical poets such as John Donne and Andrew Marvell used techniques like highly intricate word play, paradoxical imagery and persuasive literary devices such as paradox and hyperbole. Their purpose in employing these techniques was to capture the reader's attention by using strangeness, humour or sheer outrageousness. As a result of this style, the metaphysical poets received criticism particularly from Samuel Johnson who accused of it being "far-fetched". The writer's intentions in each sonnet differ. ...read more.

In both sonnets the poet has employed hyperbole to assist with his comparison. Firstly in 'Shall I compare thee...' he quotes ' but thy eternal summer shall not fade' and secondly in 'My mistress' eyes...' he quotes 'grant never saw a goddess go'. Both of these are examples of hyperbole as his mistress is not a goddess and summer is not eternal so it will fade. In terms of structure both sonnets follow the Shakespearean conventions of sonnet writing in many ways however, 'My mistress' eyes...' subverts many of the convention. In the 16th century, there were certain expectations associated with sonnet writing such as; it was a method of seduction or declaration of affection. Mostly Shakespeare also uses the sonnets to manipulate expectations. Women also expected the sonnets to list their qualities such as how beautiful their eyes were etc. the poet's also often reversed convention to arouse humour in the reader. Rossetti's 'Remember me when I am gone...' also a sonnet is written to express love and the desire not to be forgotten. However, there are differences such as the tone of the poem is very melancholy and a sonnet is usually a cheerful poem where the poet declares his love for the subject. The poem also is not a conventional love sonnet because she is not declaring not to be forgotton; she also does not compare anybody to anything for instance 'Shall I compare thee...' ...read more.

Lady Montague is very aggressive and pugnacious and the exclamation after the word vile shows this. It is clear that the poets studied had very different attitudes for love, for example Shakespeare's 'My mistress' eyes...' and Lady Montague's 'answer to a love letter...' both have different attitudes to love. In 'My mistress' eyes...' Shakespeare's attitude towards love is he doesn't believe in complimenting falsely and believes love is not about physical appearance. In 'Answer to a love letter...' Montague believes love hurts and it is false or deceitful which makes a connection between the two poems. The poem, which had the greatest impact on me, was 'An answer to a love letter...' because William Shakespeare dominates the other poems and the poem compliments women in those days. 'Answer to a love letter' captured my attention straight away because it has an angry, intimidating tone and has several powerful literary devices also. The first literary device I saw was metaphors foe example ' Th' already plunder'd need no robber fear' this is a metaphor of thief and it means that she thinks men steal women hearts and break them. Another powerful literary device which was used was repetition for example 'you may see eyes, and you may feel a heart' was repeated which makes it more powerful and that phrase stays in your head. This poem to me was the most powerful because it feels like she has personally gone through what she is waiting and about her personal experiences ...read more.