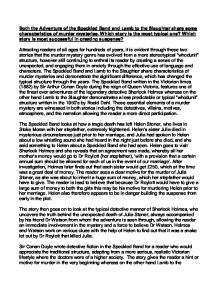 Both the Adventure of the Speckled Band and Lamb to the Slaughter share some characteristics of murder mysteries. Which story is the most typical one? Which story is most successful in creating suspense?

Both the Adventure of the Speckled Band and Lamb to the Slaughter share some characteristics of murder mysteries. Which story is the most typical one? Which story is most successful in creating suspense? Attracting readers of all ages for hundreds of years, it is evident through these two stories that the murder mystery genre has evolved from a more stereotypical "whodunit" structure, however still continuing to enthral its reader by creating a sense of the unexpected, and engaging them in anxiety through the effective use of language and characters. The Speckled Band and Lamb to the Slaughter share characteristics of murder mysteries and demonstrate the significant difference, which has changed the typical structure through the years. The Speckled Band written in the Victorian times (1882) by Sir Arthur Conan Doyle during the reign of Queen Victoria, features one of the finest ever adventures of the legendary detective Sherlock Holmes whereas on the other hand Lamb to the Slaughter demonstrates a less predictable or typical "whodunit" structure written in the 1950's by Roald Dahl. Those essential elements of a murder mystery are witnessed in both stories including the detectives, villains, motives, atmosphere, and the narration allowing the reader a more direct participation. The Speckled Band looks at how a tragic death has left Helen Stoner, who lives in Stoke Moran with her stepfather, extremely frightened. Helen's sister Julia died in mysterious circumstances just prior to her marriage, and Julia had spoken to Helen about a low whistling sound she had heard in the night just before she died, and she said something to Helen about a Speckled Band she had seen. Helen goes to visit Sherlock Holmes and she reveals that an agreement was made, whereby all her mother's money would go to Dr Roylott (her stepfather), 'with a provision that a certain annual sum should be allowed for each of us in the event of our marriage'. ...read more.

with him, but on the other hand he may've thrown it away", suggesting he is unsure and not taking into consideration other possibilities of a weapon. He reacts immediately to the "small patch of congealed blood" found on Patrick's head but doesn't appear to be very focused and rather easily distracted from his investigations by offers from Mary. He does not appear to ask many questions and doesn't investigate all the possibilities to Patrick's death. Jack Noonan and the other detectives with him do not appear very professional or experienced at their job because they know how Patrick died but do not sincerely work to find the "heavy blunt metal". Jack Noonan and the other detectives accept a drink while they are working and never pay any attention to the house or the surroundings. Mary suggests certain things by implying the murderer is a man making Jack Noonan change the focus of the investigation. She also says that a man must have killed Patrick therefore not letting him think of her as a suspect at all. 'Well,' she said. 'Here you all are, and good friends of dear Patrick's too, and helping to catch the man who killed him'. She uses manipulative language to direct the detectives in the way she wishes. Mary then tries to get rid of the weapon, which was, she used to kill Patrick with my "begging" the detectives to eat the lamb. Jack Noonan doesn't think carefully why she may be forcing him and the other detectives to eat the lamb in this manner but instead accepts to eat the lamb. Mary's natural behaviour manipulates the police and this means they do not correctly investigate the crime scene and herself as a suspect in a professional manner. However it can be argued that it is not really Jack Noonan's fault completely because he knows Mary well as a friend and wouldn't take her as a suspect. ...read more.

However at the end of the story this may change because Mary giggles and this makes the reader rather uneasy as if Mary had wanted to kill Patrick on purpose. They now may look at her in a different way. Dahl seems to now look at the story from another perspective detaching himself from Mary by using her full name. The Speckled Band' is set in Victorian times. We know this because it uses old -fashioned language, and there are certain pieces of evidence as women wore long dresses and gloves. Words such as "meddler" and "Scotland Yard jack-in-office" show old-fashioned text. We also know this because dog-carts were around in this time. "There is no dog cart which throws up mud in that way". You can tell that 'Lamb to the Slaughter' is set in the 1950's because the language used is modern. In the story there is also a car "tyres on the gravel outside", and a thermos bucket "Fresh ice in the Thermos Bucket." They both show that the story is more modern. In conclusion I feel that both stories capture the attention of the reader and are very good in creating suspense and tension. I personally feel that The Speckled Band is a more typical story because it has the traditional male detective, male villain, and a female victim. This means it is more of a realistic idea. I feel that The Speckled Band is a more typical murder mystery with a mysterious old mansion as the setting and the villain is caught, however a certain element of variety in Lamb to the Slaughter also attracts readers. The Speckled Band really held my attention especially through the narrator Dr Watson because the story is seen at a greater and depth. Holmes reveals at the end that he was indirectly responsible for Dr Roylott's death although he cannot bring himself to regret it. A good murder mystery must have a very accurate structure and I feel a more typical one works more effectively. By Anish Acharya 10BN ...read more.