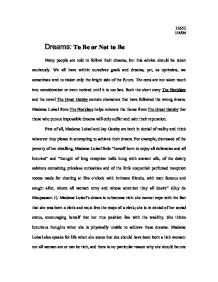 Both the short story The Necklace and the novel The Great Gatsby contain characters that have followed the wrong dream. Madame Loisel from The Necklace

12652 1/4/04 Dreams: To Be or Not to Be Many people are told to follow their dreams, but this advice should be taken cautiously. We all have within ourselves goals and dreams, yet, as optimists, we sometimes tend to vision only the bright side of the future. The cons are not taken much into consideration or even noticed until it is too late. Both the short story The Necklace and the novel The Great Gatsby contain characters that have followed the wrong dream. Madame Loisel from The Necklace helps reiterate the theme from The Great Gatsby that those who pursue impossible dreams will only suffer and taint their reputation. First of all, Madame Loisel and Jay Gatsby are both in denial of reality and think whatever they please in attempting to achieve their dream. For example, distressed of the poverty of her dwelling, Madame Loisel feels "herself born to enjoy all delicacies and all luxuries" and "thought of long reception halls hung with ancient silk, of the dainty cabinets containing priceless curiosities and of the little coquettish perfumed reception rooms made for chatting at five o'clock with intimate friends, with men famous and sought after, whom all women envy and whose attention they all desire" (Guy de Maupassant 1). ...read more.

For instance, after losing her friend's necklace, Madame Loisel works strenuously to pay back the cost of the replacement and at the end of the ten years, she "looked old now. She had become the woman of impoverished households- strong and hard and rough" (Guy de Maupassant 4). Madame Loisel was unable to cast off her dream of becoming wealthy, and on top of the four hundred franc dress that cost her husband all his savings, she had to ask her rich friend for a necklace. She didn't need a necklace in order to go to the dance, but she had visions of a "true rich woman." It was her greed to make her false dream come true that gave her the harsh ten years of toil that was many times the misery of her life as a regular clerk. Furthermore, when Nick first sees Gatsby, Gatsby "stretched out his arms toward the dark water in a curious way," towards "a single green light, minute and far away, that might have been the end of a dock" (Fitgerald 26). ...read more.

The answer to the persistent question on how Gatsby earned all his money is this: he has gained it illegally. While feeling the desire to gain Daisy back, Gatsby knew at the same time that working for money righteously would not give him enough of it to please Daisy. Thus, he has turned to degradable ways in obtaining his massive wealth. His dream blinded Gatsby to all moral sensitivity and is the cause of the shame he feels when Tom reveals his hidden secret in front of Daisy. Gatsby and Madame Loisel mar their reputation as a result of seeking accomplishment of their unattainable dream. Madame Loisel is a similar character to Jay Gatsby, because they both are oblivious to the irrationality of their dream and thus fall into chaos, rather than joy. We should take the stories of Madame Loisel and Gatsby's downfalls as valuable lessons and avoid living a misleading life. It is not possible to create things that cannot be, and denial of this fact is only detrimental to us. Even though it may not be easy and require time, letting go of a false dream will greatly improve one's life. ...read more.