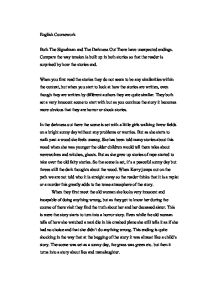 Both The Signalman and The Darkness Out There have unexpected endings. Compare the way tension is built up in both stories so that the reader is surprised by how the stories end.

English Coursework Both The Signalman and The Darkness Out There have unexpected endings. Compare the way tension is built up in both stories so that the reader is surprised by how the stories end. When you first read the stories they do not seem to be any similarities within the context, but when you start to look at how the stories are written, even though they are written by different authors they are quite similar. They both set a very innocent scene to start with but as you continue the story it becomes more obvious that they are horror or shock stories. In the darkness out there the scene is set with a little girls walking threw fields on a bright sunny day without any problems or worries. ...read more.

This is were the story starts to turn into a horror story. Even while the old woman tells of how she watched a nazi die in his crashed plane she still tells it as if she had no choice and that she didn't do anything wrong. This ending is quite shocking in the way that at the begging of the story it was almost like a child's story. The scene was set as a sunny day, the grass was green etc. but then it turns into a story about lies and manslaughter. In The Signalman the writer starts off with a very strange scenario in which the narrators opening words are "Halloa! Below there!" This is strange because we have no description of the surroundings or any atmosphere we just start off with a phrase. ...read more.

We then get a very detailed account of his surrounding using words like Dungeon to describe the cutting in which the signalman's box is. The writer adds tension by making the narrator wait until the next evening until he begins talk to the signalman again, also because of the fact that he asked to meet him during the evening instead of during the day. As the narrator meets the signalman more and more he begins to find out about what is troubling him. He is seeing ghosts. This now makes the story a horror. When the narrator comes to visit the signalman on the last time he finds out that he is dead. Even more strange the man saw his own death. ...read more.