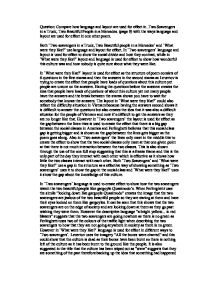 Both `Two scavengers in a Truck, Two Beautiful people in a Mercedes` and `What were they like?` use language and layout for effect.

This is also shown through the use of the one full stop suggesting that this is a freeze frame and this is the only part of the day they interact with each other which is effective as it shows how little the two classes interact with each other. Both `Two Scavengers` and `What were they like?` use a gap in the structure as a effective way of showing something as `Two scavengers` uses it to show the gap in the social class and `What were they like?` uses it show the gap about the knowledge of this culture. In `Two scavengers` language is used to create effect to show how the two scavengers watch the two beautiful people like gargoyle Quasimodo's. When Ferlinghetti uses the simile "looking down like gargoyle Quasimodo" creates the image that the two scavengers are jealous of the two beautiful people so they are staring at them and have their eyes locked on them like gargoyles. It can be seen that this shows that the two scavengers are on the edge of society and are looking down at them as they go past wishing they were them. ...read more.

Similar to `Two scavengers` Levertov uses descriptive language in `What were they like?` for effect in the line "stone lanterns illumined pleasant ways" as this used the for effect as it makes it seem as if the culture was a happy pleasant culture due to their pleasant ways which makes this culture look innocent making the reader feel sorry for what happened to the culture due the empathy built up here. Layout and Language are used in both `Two Scavengers in a Truck, Two Beautiful people in a Mercedes` and `What were they like?` however they are used in similar and different ways but they are used for effect for different reasons. In `Two scavengers` It is used to show the gap in the social class system and how the scavengers are jealous of the two beautiful people and in `What were they like?` it is used to show how the society is forgotten and how they were a pleasant culture and that they are now gone. ...read more.