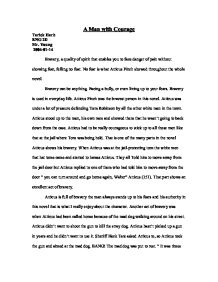 Bravery, a quality of spirit that enables you to face danger of pain without showing fear, felling no fear. No fear is what Atticus Finch showed throughout the whole novel.

A Man with Courage Tarick Harb ENG 2D Mr. Young 2004-01-14 Bravery, a quality of spirit that enables you to face danger of pain without showing fear, felling no fear. No fear is what Atticus Finch showed throughout the whole novel. Bravery can be anything. Facing a bully, or even living up to your fears. Bravery is used in everyday life. Atticus Finch was the bravest person in this novel. Atticus was under a lot of pressure defending Tom Robinson by all the other white men in the town. Atticus stood up to the men, his own race and showed them that he wasn't going to back down from the case. Atticus had to be really courageous to stick up to all those men like that at the jail where Tom was being held. ...read more.

Sheriff Heck Tate asked Atticus to, so Atticus took the gun and aimed at the mad dog. BANG! The mad dog was put to rest. " It was times like these when I thought my father, who hated guns and had never been to any wars, was the bravest man who ever lived" Scout (105). "Courage is when you know you're liked before you begin, but you begin anyway and see it through no matter what" That's what Atticus Finch, he thinks that courage is not a man with a gun in his hand. Atticus knows that "real Courage" is when you fight your for your rights even though you know that your going to win or loose. Atticus showed courage when he went along with Heck Tate's Lie about what happened the night Bob Ewell was found stabbed to death. ...read more.

Atticus is brave enough to risk his whole carrier to save one man from publicity, In conclusion, Atticus shows courage and bravery in many instances, through out the novel. He doesn't act brave by getting to fights and killing people, he's brave because he stands by what's right and what's not and he knows if he's done something wrong or if he's done something right. Atticus has the strongest motivation ever to keep him going, it's his kids. One time he was asked by scout why he had taken the Tom Robinson case, which he knew, he was going to lose and he said. " For a number of reasons. The main one is, if I didn't I couldn't hold my head in town, I couldn't represent this county in the legislative, I couldn't even tell you or Jem not to do something again." Atticus wouldn't be able to live without being brave or courageous. He uses its everyday. All Atticus wants to do is the right thing. ...read more.