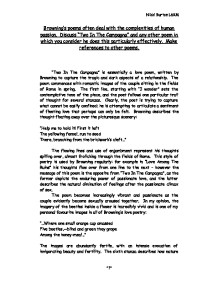 Browning's poems often deal with the complexities of human passion. Discuss &quot;Two In The Campagna&quot; and any other poem in which you consider he does this particularly effectively. Make references to other poems.

Browning's poems often deal with the complexities of human passion. Discuss "Two In The Campagna" and any other poem in which you consider he does this particularly effectively. Make references to other poems. "Two In The Campagna" is essentially a love poem, written by Browning to capture the tragic and dark aspects of a relationship. The poem commences with romantic images of the couple sitting in the fields of Rome in spring. The first line, starting with "I wonder" sets the contemplative tone of the piece, and the poet follows one particular trail of thought for several stanzas. Clearly, the poet is trying to capture what cannot be easily confined; he is attempting to articulate a sentiment of fleeting love that perhaps can only be felt. Browning describes the thought floating away over the picturesque scenery: "Help me to hold it! First it left The yellowing fennel, run to seed There, branching from the brickwork's cleft..." The flowing lines and use of enjambment represent his thoughts spilling over, almost frolicking through the fields of Rome. This style of poetry is used by Browning regularly: for example in "Love Among The Ruins" his thoughts flow over from one line to the next - however the message of this poem is the opposite from "Two In The Campagna", as the former depicts the enduring power of passionate love, and the latter describes the natural diminution of feelings after the passionate climax of sex. ...read more.

I kiss your cheek, Catch your soul's warmth,--I pluck the rose And love it more than the tongue can speak- Then the good minute goes." "Two In The Campagna" concludes with the sentiment that he cannot stay fixed to one person however much he wishes he could. The final verse is the subject of much critical controversy: some critics claim that it is negative - Browning is saying that human beings can never achieve infinite passion. Others say it is positive - he has managed to hold on to the thread of thought long enough to realise love is infinite. The fact that these final lines can be interpreted in such significantly different ways somehow intimates the true complexity of human passion and how even Browning struggles to verbalise it. The second poem I shall discuss with reference to the complexities of human passion is "Porphyria's Lover". This piece initially seems to be a typically idyllic Victorian love poem, with a flowing musical rhyme scheme; the rhyme is in the pattern of 'ABABB'. This is a regular and formal poem design, which complements the apparent pleasant, characteristic Victorian content. The title also leads the reader to believe that the piece is a typical love poem - this is conveyed in the word 'lover', and equally so in 'Porphyria', as this sounds incredibly beautiful and feminine. 'Porphyria' in actual fact is a hereditary disease in which the person who has it suffers from attacks of severe pain resulting in paralysis and temporary insanity. ...read more.

This is, of course, incredibly poignant and striking - Browning somehow conveys this brutal act of murder in a slightly disturbing yet beautifully moving manner. Browning's choice of language aids this, as does the flowing style of the lines, with enjambment to represent how his feelings similarly flow on inexorably and uncontrollably. The murder is a complete shock to the reader, as no indication of the man's intentions was expressed previously - most likely because he himself had not realised what he might do. This is an extreme complexity of human passion; most people do not experience such intense emotions, and certainly do not act upon them in such illogically violent ways. However, it does capture the essence of jealousy, possessiveness and the yearning for eternal unity that many people do feel. Browning has evidently taken this to the extreme effectively, as it is his style to shock the reader. In conclusion, Browning uses many different techniques of conveying the complexities of human passion, and does this effectively from many points of view on love. However, it does seem that Browning usually has a slightly subdued, possibly even warped view of love and romance - and this could be because his own love life was publicly perceived to be ultimately perfect but retrospectively it appears his marriage with Elizabeth Browning was full of doubt and possessiveness, as seen in "Any Wife To Any Husband" which most critics believe to be based on the troubled relationship between the Browning's. Nikki Burton L6KM *1* ...read more.