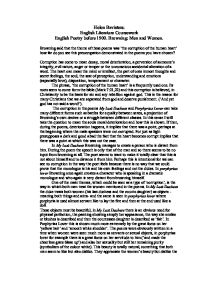 Browning said that the theme of these poems was 'the corruption of the human heart' how far do you see this preoccupation demonstrated in the poems you have chosen?

Helen Bavisters: English Literature Coursework English Poetry before 1900. Browning: Men and Women. Browning said that the theme of these poems was 'the corruption of the human heart' how far do you see this preoccupation demonstrated in the poems you have chosen? Corruption has come to mean decay, moral deterioration, a perversion of someone's integrity, evil nature, anger or temper or the unconscious accidental alteration of a word. The heart can mean the mind or intellect, the part of ones inmost thoughts and secret feelings, the soul, the seat of perception, understanding and emotions (especially love), disposition, temperament or character. The phrase, 'the corruption of the human heart' is a frequently used one. Its roots seem to come form the bible (Mark 7:21,22) and this corruption is believed, in Christianity to be the basis for sin and any rebellion against god. This is the reason for many Christians that we are separated from god and deserve punishment. ('And yet god has not said a word!'). The corruption in the poems My Last Duchess and Porphyrias Lover can take many different forms such as battles for equality between sexes, a projection of Browning's own desires or a struggle between different classes. ...read more.

It appears that it is her femininity then, and her need for independence or 'vainer ties' that has caused her death rather than the man. It seems that he is without blame for we are told that 'god has not said a word' and makes no moves to punish him. One of the obvious benefits that both men see from the death of their 'women' is that they are now able to control them. In My Last Duchess the curtain over the painting allows him to control who looks at her and also who she looks at. In porphyrias lover he controls her by opening her eyes and propping up her head. Another theme that could be viewed as a type of corruption is the struggle between classes. It is made clear that porphyria belongs to a different (possibly higher) social group to her lover, as it is obvious that she is unwilling to leave them for him ('and all in vain'). Her hair is described as yellow, which cannot only be a symbol for potential danger but also a symbol of riches or money. In this way it could be interpreted that she was strangled by her own wealth, the amount of wealth may be represented by how many times the hair went round her throat and how long it was. ...read more.

arm about her waist'. He does not seem to know what to do with her. I think that he does not know how to 'experience' her beauty. If he touches her or sleeps with her then he is not experiencing her beauty but her sexuality. He does not know how he can preserve her or how he can feel her beauty. In the end he 'found a thing to do' and kills her. Into about the final third of the poem the rhyming scheme becomes even more simplistic and so does his use of language ('rosy little head'). Here he tries to experience her beauty making her eyes open and her cheeks blush. He seems pleased with this but her remaining traces of life still seem to scare him, her eyes are described as 'bee(s)' or something dangerous inside something beautiful ('as a shut ...stain'). I therefore conclude that there are traces of corruption in both dramatic monologues but that neither poem shows a definite theme for 'the corruption of the human heart'. Human hearts cannot be totally pure and good so there will always be a degree of corruption in humans. As I believe the crimes to be ones of love and also stupidity I cannot say that these are corruptions as they are both parts of the heart in the beginning and not things that are seen as the result of corruption. ...read more.