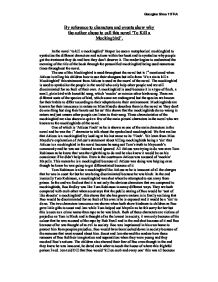 By reference to characters and events show why the author chose to call this novel 'To Kill a Mockingbird'.

By reference to characters and events show why the author chose to call this novel 'To Kill a Mockingbird'. In the novel 'to kill a mockingbird' Harper lee uses a metaphorical mockingbird to symbolise the different characters and actions within her book and to symbolise why people get the treatment they do and how they don't deserve it. The reader begins to understand the meaning of the title of the book through the personified mockingbird being used numerous times throughout the novel. The use of the Mockingbird is used throughout the novel but is 1st mentioned when Atticus is telling his children how to use their shotguns but tells them 'it's a sin to kill a Mockingbird' this statement from Atticus is used as the moral of the novel. The mockingbird is used to symbolise the people in the world who only help other people and are still discriminated for no fault of their own. A mockingbird is used because it is a type of finch, a small, plain bird with beautiful song, which 'mocks' or mimics other birds song. There are different sorts of the species of bird, which some are endangered but the species are known for their habits to differ according to their adaptation to their environment. ...read more.

The two characters innocence are shown when both show kindness to children as Boo gave little gifts to scout and Jem while Tom helped out Mayella as he felt sorry for her but this is seen as a crime worse than rape as he was black. Both of these characters are victims of prejudice as Tom is Black and is thought of as the lowest in society, it was only because of his colour that he was accused of the rape by Bob Ewell and in the end shot because of it and Boo because of he was thought of as evil to society. Boo was imprisoned in his own home to protect him from peoples prejudice, Boo would have been looked down in society because of the rumours that went around about him. Scout and Jem showed the readers how these rumours of Boo fed their imagination and superstition when they were young and they mocked Boo's actions. The children also showed their fear of Boo even though in the end they knew he was innocent, he dared each other to touch the house of where this frightful person lived. Jem told Dill that Boo would 'kill us each and every one' this was all because they hadn't seen him for themselves and they were running on the societies own judgement, victims of prejudice. ...read more.

The Mockingbird is not only symbolized to just describe the characters it is also used to explain the atmosphere in some of the situations in the novel. One of the situations is when Atticus shot the diseased dog in the street. The dog would have symbolized the mockingbirds of the novel such as Tom Robinson as it was shot like him and related to the original quote of shooting mockingbirds. Before the dog got shot it was described to have 'raised his head' this would have been the last ounce of dignity when he would have faced his opposition. Before the shot happened the atmosphere was described as 'deadly and 'the mockingbirds were silent' the atmosphere reacted was of such that was also described later when scout and Jem got pounced on by Bob Ewell. The atmosphere at that point was portrayed like just before the dog got shot as the 'stillness before a thunderstorm' and also on the way to the pageant 'even the mockingbird is silent'. Harper lee showed the readers of her book that she didn't agree with the way people can be stereotyped in the world and how prejudice can stop people living the life they should. This was the reason why she chose to use the metaphorical symbolism the way she has as she has effectively shared all her views about that time and the way people live through a simple minded 'mockingbird' Georgina Sims 11FRA ...read more.