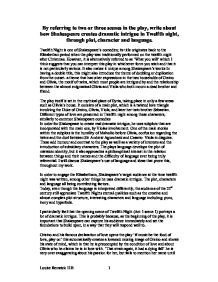 By referring to two or three scenes in the play, write about how Shakespeare creates dramatic intrigue in Twelfth night, through plot, character and language.

By referring to two or three scenes in the play, write about how Shakespeare creates dramatic intrigue in Twelfth night, through plot, character and language. Twelfth Night is one of Shakespeare's comedies; its title originates back to the Elizabethan period when the play was traditionally performed on the twelfth night after Christmas. However, it is alternatively referred to as 'What you will' which I think suggests that you can interpret this play in whichever form you wish and that it is not particularly serious. It also makes it unique among Shakespeare's works In having a double title, this might also introduce the theme of doubling or duplication from the outset- a theme that has other expressions in the two households of Orsino and Olivia, the motif of twins, which most people are intrigued by and the relationship between the almost enigmatical Olivia and Viola who both mourn a dead brother and friend. The play itself is set in the mythical place of Ilyria, taking place in only a few areas such as Olivia's house. It consists of a main plot, which is a twisted love triangle involving the Duke of Orsino, Olivia, Viola, and later her twin brother Sebastian. Different types of love are presented in Twelfth night among these characters, similarly to common Shakespeare comedies In order for Shakespeare to create real dramatic intrigue, he uses subplots that are incorporated with the main one, by Violas involvement. One of the main stories within the subplots is the humility of Malvolio before Olivia, confusion regarding the twins and the duel between Sir Andrew Aguecheek and Cesario- Viola in disguise. These add humour and contrast to the play as well as a variety of interests and the introduction of subsidiary characters. The plays language develops the plot of mistaken identity, but it also approaches a philosophical interest in the relation between things and their names and the difficulty of language ever being truly referential. ...read more.

His use of 'Viol-de-gamboy' a sexual joke would have also had a double meaning for the Elizabethans; in this way Shakespeare is keeping his audience interested through entertainment. Maria also has some humorous qualities, when Toby tells her 'Hath all the good gifts of nature' she picks up on this and changes the last word to 'natural' 'He hath indeed all, most natural:' which was known then at the time we are studying as 'Idiot! She also takes pleasure in scolding Sir Toby, which again puts more interest into the play, considering he is trying to be the practical joker. The characters appearance engage the audience, ugly humour regarding his name 'Belch' suggests that perhaps he is not the most attractive man and Sir Andrews hair 'it hangs like a flax on distaff' this is robust simile which balances out the plays love poetry. It creates the image of long draping threads drying on a pole, this, like the characters is very humorous. There foolish appearances are emphasized through Shakespeare's use of language. Act 1 scene 3 also incorporates Sir Andrew Aguecheek, whom is called 'shrew' by Sir Toby; it develops a clearer picture of both of them, Toby's personality and how Andrew appears. They are often played as a comic double act of fat man/thin man, so this is why they draw interest and are popular with the audience. We get a feel for the characters by Maria's references of 'fool' On entering the scene, Andrew Aguecheek, although encouraged in a mocking manor by Toby, refuses to woo Maria, the use of a sexual innuendo here, adds to the entertainment factor as he compares her to a ship 'You mistake her knight, Accost is front her, board her woo her assail her' this is all clever use of language by Shakespeare to engage his audience. The intrigue is definitely comes from the acting of the characters in this scene, our first impression of the revellers is engaging and the structure of the plot is being formed. ...read more.

A number of plots come together in this long scene, which is why is it so engaging for the audience. The language is used in particular to help with the interest and make it more amusing, and so are the different characters and their personalities. The parallel plots of the twins, which are a topic that already create intrigue in society today and in the Elizabethan period, connect in Antonio's, mistaking identity. Malvolios humiliation shows the contrast between the uptight 'puritan' of the earlier scenes and the grinning lascivious fashion victim of this scene is pointed and when the theme of madness, which is recognised throughout the play, is suggested, the tortures see a way to take their practical joke further. Creating a huge amount of dramatic intrigue. At one stage, Olivia takes the theme of madness even further, identifying that Malvolios apparent madness is an acute example of the way in which a number of characters make fools of themselves ' I am as mad as he/ if sad and merry madness equal be.' Thinking of course of her previous meeting with Cesario, whereupon she pressed her love on him, which was not returned. Her aside 'a little thing would make me tell them how much I lack of a man' is a shared joke with the audience about men. This engages them because some may relate to her and other has mixed opinions. It is also accompanied by a clever use of a bawdy pun of precisely what 'little thing' of a man's it is she lacks. This scene seems to have untangled the 'knot' of the plots complications, as I have demonstrated by giving examples and explanations; Shakespeare has successfully created a lot of dramatic intrigue throughout this section of act III. I have studied this text and explained how Shakespeare has created dramatic intrigue, by using plot, character and language throughout the play. Overall, the scenes I looked at in detail proved that all of these are contributing factors in the way he does this. 1 Louise Renwick 11B ...read more.