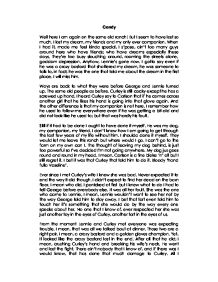 Candy Well here I am again on the same old ranch! But I seem to have lost so much. I lost my dream, my friends and my only ever companion. When I had it, made me feel kinda special, I s'pose, ain't too many guys around here who have friends; who have dreams especially these days. They're too busy slouching around, roaming the streets alone, goddam depression. Anyhow, Lennie's gone now. I gotta say even if he was a crazy bastard that shattered my dream, he was someone to talk to, in fact; he was the one that told me about the dream in the first place. I will miss him. Ways are back to what they were before George and Lennie turned up. ...read more.

I shoulda done it myself. They would let me leave this ranch but where would I go. I can't go to the farm on my own can I. The thought of leaving my dog behind, is just too powerful so I've decided I'm not going anywhere. My dog jus goes round and round in my head. I mean, Carlson is a fine bloke 'n' all but I still regret it. I bet it was that Curley that told him to do it. Bloody 'hand fulla Vaseline'. Ever since I met Curley's wife I knew she was bad. Never expected it to end the way it did though. I didn't expect to find her dead on the barn floor. ...read more.

He went and lost the fight. There ain't nobody that I know of, and if there was I would know, that has done that much damage to Curley. All I remember was Carlson's gun missing and they went to find Lennie to put an end to it all. Rumour has it that George hadda overpower Lennie to get the gun. Then Lennie got shot in a struggle but I gotta feeling that, by the way Slim was quiet, that something is not right. Everyone's moving on now. George has left. Lennie is dead. Curley's wife is dead. Curley's gotta new girlfriend. I nearly hadda new pup from Lulu, Slim's dog, but jus as I was pickin' it it made me feel bad inside; made me feel even worse bout my old companion. ...read more.