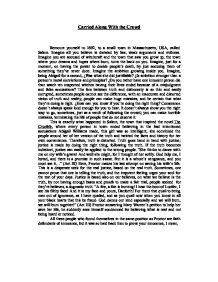 Carried Along With the Crowd

Carried Along With the Crowd Remount yourself to 1692, to a small town in Massachusetts, USA, called Salem. Imagine all you believe is dictated by lies, weak arguments and evilness. Imagine you are accused of witchcraft and the town that saw you grow up, the town where your dreams and hopes where born, turns the back on you. Imagine, just for a moment, on having the power to decide people's death, by just accusing them of something they've never done. Imagine the ambition growing inside you. Imagine, being Abigail for a second, �Was what she did justifiable? �Is ambition stronger than a person's moral convictions and principles? �Do you rather have one innocent person die than watch ten suspected witches having their lives ended because of a misjudgment and false accusations? The line between truth and dishonesty is so thin and easily corrupted, sometimes people cannot see the difference, with an inaccurate and distorted vision of truth and reality, people can make huge mistakes, and be certain that what they're doing is right. �How can you know if you're doing the right thing? Conscience doesn't always speak loud enough for you to hear. ...read more.

(Act III) Proctor answering Mary Warren's petition to help her save her life, he suddenly sees himself condemned for believing what is real and not being heard or noticed. All these people who found themselves in the same position as Proctor are faith defendants of innocence, but it was so hard back then to prove your innocence, I mean, �How could you prove the opposite of an accusation if, your accusation had no more evidence than the words of a perturbed girl? "I speak to my own sins; I cannot judge another. I have no tongue for it." John Proctor, being innocent of all accusations, in order to save his life, confesses witchcraft, yet refuses to accuse anyone else to maintain his freedom and innocence. He knows he's innocent, he knows he's fallen into Abigail's trap, but he will not play her game, he refuses to make false and not proved accusations. The word for his actions is loyalty. He is loyal to his beliefs, loyal to his beloved. He feels a certain loyalty also towards the truth. Even in his moments of pure desperation and desolation, he doesn't leave his honor and loyalty aside. ...read more.

By all of the above I can prove that, because of the loss of sense of truth and proofs to make a proper trial and sentence, it is preferable to let one innocent person die than to assassinate ten supposed witches. Ten souls full of resentment, anger, impotence. Quiet mouths screaming in pain to themselves, silent minds stormed with thoughts, not being able to prove they're innocence. �Must ten accused of witchcraft be murdered because of a flaw of society? �Because the crowd decided to believe in something as mean as lies and obscurity? It is relevant to point out how people, in order not to be accused of different can act in an irrational way. What we can do now is simply to question ourselves constantly our beliefs, our senses of truth, our moral convictions, because there's only one person needed to scatter sinfulness and amorality to convert a whole town, to disturb and distort entire generations, entire villages, entire countries. And you can some day find yourself in the position of the town people, �Will you fall into Abigail's death trap? �Will you stand up for what you think is right? It is entirely up to you, one person can make the difference, even if he or she dies attempting. ?? ?? ?? ?? ...read more.