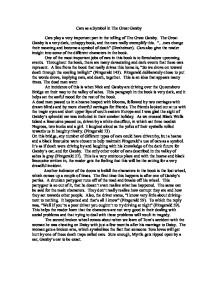 Cars as a Symbol in The Great Gatsby.

Cars as a Symbol in The Great Gatsby Cars play a very important part in the telling of The Great Gatsby. The Great Gatsby is a very dark, unhappy book, and the cars really exemplify this. "...cars change their meaning and become a symbol of death" (Dexheimer). Cars also give the reader insight into some of the different characters in the book. One of the most important jobs of cars in this book is to foreshadow upcoming events. Throughout the book, there are many devastating and dark events that these cars represent. A line from the book that really drives this home is, "So we drove on toward death through the cooling twilight" (Fitzgerald 143). Fitzgerald deliberately chose to put the words drove, implying cars, and death, together. This is an idea that appears many times. The dead man went An incidence of this is when Nick and Gatsby are driving over the Queensboro Bridge on their way to the valley of ashes. This paragraph in the book is very dark, and it helps set the awful mood for the rest of the book. ...read more.

Another indicator of the doom to befall the characters in the book is the lost wheel, which comes up a couple of times. The first time this happens is after one of Gatsby's parties. A drunken partygoer runs off of the road and breaks off his wheel. This partygoer is so out of it, that he doesn't even realize what has happened. The same can be said for the main characters. They don't really realize how corrupt they are and how they act towards other people. Also, the driver states, "I know very little about driving-next to nothing. It happened and that's all I know" (Fitzgerald 59). To which the reply was, "Well if you're a poor driver you oughtn't to try driving at night" (Fitzgerald 59). This helps the reader learn that the characters are not very good in their dealing with social problems and that trying to deal with these problems will result in tragedy. The second broken wheel comes about when we learn of Tom's accident with the woman he was cheating on Daisy with just a few months after his marriage to Daisy. ...read more.

Hence, the tainted color of his car. His car is also really overdone, which shows that he really does not belong in the East. The car and Gatsby are more suited to the midwestern life. In the East, showing off a car of that magnitude is considered showy, and people think he is trying to be very flashy by owning it. Daisy's roadster that she owns in the Midwest, however, is white, showing her innocence at that point in her life. The fact that the car is a roadster shows the reader that she has the potential to become corrupt, which did happen. While Daisy is driving Gatsby's car, the car turns yellow. "Yellow symbolizes money and corruption in the novel" (Symbolism in The Great Gatsby). "Instead of being a 'rich cream color,' a witness is quoted saying 'It was a yellow car,' implying that the dream is dead" (Swygert). In the East Daisy becomes corrupt, and the color change is the way that the reader is shown this change in her, and the death of Gatsby's dream of marrying Daisy. As I have shown, cars play a very important part in helping portray the darkness in The Great Gatsby. The cars symbolize the death and despair of the story and help to characterize some of the main characters. ...read more.