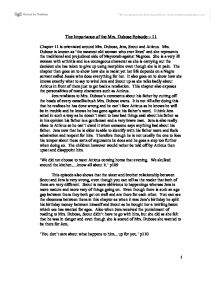 Chapter 11 is orientated around Mrs. Dubose, Jem, Scout and Atticus. Mrs. Dubose is known as the meanest old woman who ever lived and she represents the traditional and prejudiced side of Maycomb against Negroes.

The Importance of the Mrs. Dubose Episode - 11 Chapter 11 is orientated around Mrs. Dubose, Jem, Scout and Atticus. Mrs. Dubose is known as 'the meanest old woman who ever lived' and she represents the traditional and prejudiced side of Maycomb against Negroes. She is a very ill woman with arthritis and is a courageous character as she is carrying out the decision she has taken to give up using morphine even though she is in pain. The chapter then goes on to show how she is racist yet her life depends on a Negro servant called Jessie who does everything for her. It also goes on to show how she knows exactly what to say to wind Jem and Scout up as she talks badly about Atticus in front of them just to get back a retaliation. This chapter also exposes the personalities of many characters such as Atticus. Jem retaliates to Mrs. Dubose's comments about his father by cutting off the heads of every camellia bush Mrs. ...read more.

You can see the closeness between them in this chapter as when it was Jem's birthday he split his birthday money between himself and Scout as he bought her a twirling baton which see has wanted for ages. Also when Jem received the punishment of reading to Mrs. Dubose, Scout didn't have to go with him, but she did as she felt that he was in danger and even though she is scared of Mrs. Dubose she wanted to be there for Jem. 'You don't care about what happens to him...up for you.' p110 This episode also shows a lot of Atticus's personality as a man and as a father. From the chapter you can see that he cares about his children a lot as he teaches his children how to stand up for themselves and how to be a gentleman at the same time. He does this by making an insult while at the same time being polite and not giving her an opportunity to retaliate. ...read more.

This chapter also shows a lot about race relations in Maycomb as in this chapter you can see the amount of opposition to Atticus. You can see that the whole of Maycomb has turned against Atticus as he believes a Negroes word over a white mans word. You can see the opposition is so big that the white community of Maycomb are even giving a hard time to Atticus's kids and the opposition is now even in his own family. Examples of this racial differentiation can be seen in the language as Negroes use full names to talk to White people whereas white people use just first names to talk to Negroes. I therefore conclude by saying that this episode in the book is very important as it coveys many messages and meanings which describe the county of Maycomb at that time. You can also tell from this chapter how strong racial hatred and prejudice was back then. It is also a chapter where many opinions and views are conveyed. ?? ?? ?? ?? 1 ...read more.