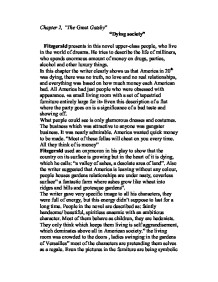 Chapter 2, "The Great Gatsby" "Dying society" Fitzgerald presents in this novel upper-class people, who live in the world of dreams. He tries to describe the life of milliners, who spends enormous amount of money on drugs, parties, alcohol and other luxury things. In this chapter the writer clearly shows us that America in 20th was dying, there was no truth, no love and no real relationships, and everything was based on how much money each American had. All America had just people who were obsessed with appearance. "a small living room with a set of tapestried furniture entirely large for it" Even this description of a flat where the party goes on is a significance of a bad taste and showing off. What people could see is only glamorous dresses and costumes. The business which was attractive to anyone was gangster business. It was nearly admirable. America wanted quick money to be made. "Most of these fellas will cheat on you every time. All they think of is money" Fitzgerald used an oxymoron in his play to show that the country on its surface ...read more.

Lies are existing almost in every word of person, the life was all about lies, no one knew each other from the real side: "It's just a crazy ld thing; I just slip it on sometimes when I don't care what I look like" Another theme which Fitzgerald suggested is consumerism which is clearly seen in the examples of Mister Wilson who tries the cars, but his business doesn't go too far, it is slowly going down as the country isn't in a good situation. Only destruction grows in America, the other example of failure of business is doctor T.G Ecleburg, whose advertisement is held in the middle of no where, there are no people and even no any symbol of life. The consumerism in America is still one of the important points of people in their lives, Even the name of the book "the Great Gatsby" suggesting the existence of consumerism and self aggrandisement. The word "grade" was created for the name of the book to show just from the first time as you take it to the hands that America is a country where ...read more.

Dresses, jewelleries, money, cars, parties and drugs were very common amend women. Gossip was by at that time, everyone was chatting just for fun, it didn't matter for anyone weather they were speaking truth or not. The main idea of gossiping was to seem that you know more and therefore people will communicate with you more than with others. "Well, they say he's (Gatsby) a nephew or a cousin of Kaiser Wilhelm. That's where all his money comes from". The relationships between people were very strange. Either very cold to each other or people just didn't go so deep into person to know him better. The idea of dying society was presented by Fitzgerald in a way that people were careless with each other, with themselves and of course with the country which they were destroying absolutely. The society didn't have any moral points in life. Those party's at Gatsby's house were just a surface of life were Fitzwilliam shows his own antipathy towards America in 20th. America was like a huge tree which didn't have enough water and was losing its colours and leaves. ...read more.