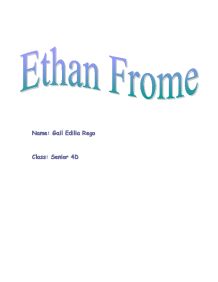 Name: Gail Edilia Rego Class: Senior 4D Character of Ethan Frome Ethan Frome, a tragic romance, first published in 1911, is widely regarded as Edith Wharton's most revealing novel and her finest achievement in fiction. Set in the bleak, barren winter landscape of New England, it is the tragic tale of a simple man, bound to the demands of his farm and his tyrannical, sickly wife, Zeena, and driven by his star-crossed love for Zeena's young cousin, Mattie Silver. An exemplary work of literary realism in setting and character, Ethan Frome stands as one of the great classics of twentieth-century American literature. The uselessness of poverty, mean spiritedness, and grim silence are all-present in the tragedy of Ethan Frome. At each turn the circumstances of rural poverty, mixed with the bitterness of isolation and failure, lead the main characters to lives of tragic resignation. As a result of their miserable existence, they grow hard and mean-spirited, rarely communicating except with complaints and anger. The townsfolk tend to avoid them and are even reluctant to speak freely of the ruined lives of Ethan, Mattie, and Zeena. Poverty's greatest curse is that it takes away options. ...read more.

For a moment such a flame of hate rose in him that it ran down his arm and clenched his fist against her." This passage from chapter 7 makes clear that Ethan is a physically strong man who commanded respect, but, as the reader comes to understand, he lacks a force of personality. His clenched fist even hints at potential physical violence. Yet these emotions ultimately lead nowhere, as his fury breaks up into a "bewildered voice", a sharp contrast to his inner "flame of hate". Ethan may be filled with emotional turmoil, but he ultimately proves weaker than his wife. Ethan Frome is presented as a tragic figure; his tragic flaw, his weakness, is his loneliness, which gives rise to his fantasies. His dreams of escaping the dreariness of his farm and leading a life outside of Starkfield; he also dreams of having Mattie for his wife. But like a robot, he goes through life, trudging to the Post Office each day and allowing his sickly wife to control his fate. At the same time, he is aware of his real situation, his "responsibility" to Zeena and his farm. ...read more.

He wanted to run away with Mattie from the start but couldn't do it because of his responsibility to Zeena. In my opinion, Ethan was never in love with Zeena. She was to him, an escape from the sadness and isolation of the winter after his mother died. She looked to him as an adventure a chance to have a good life. This failed. As the isolation crept up on them, Ethan and Zeena began to notice not the loss of their love, for they never had love, but the realism of their fates. Neither were where they wanted to be in life and their previous dreams were wrecked. This is what brought the sadness into the home, only to strengthen as winters passed. Mattie, too was not a love but rather an attempt to find something in his life to make him happy. She represented everything that he wanted in himself, youth, happiness, chance. In himself he thought that she might offer some sort of temporary escape from his own gloom. Mattie and Ethan were never in love. It was no more than a failing shot at life. This is how I conclude that the focus of this book is not a tragic love story but rather, a story of broken dreams, false hopes, and the realism of the brutality of human fates. ...read more.