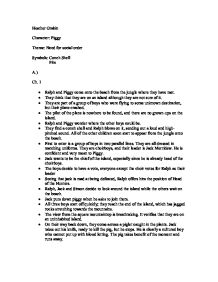 Heather Grabin Character: Piggy Theme: Need for social order Symbols: Conch Shell Fire A.) Ch. 1 * Ralph and Piggy come onto the beach from the jungle where they have met. * They think that they are on an island although they are not sure of it. * They are part of a group of boys who were flying to some unknown destination, but their plane crashed. * The pilot of the plane is nowhere to be found, and there are no grown-ups on the island. * Ralph and Piggy wonder where the other boys could be. * They find a conch shell and Ralph blows on it, sending out a loud and high-pitched sound. All of the other children soon start to appear from the jungle onto the beach. * First to enter is a group of boys in two parallel lines. They are all dressed in matching uniforms. They are choirboys, and their leader is Jack Merridew. He is confident and very mean to Piggy. * Jack wants to be the chief of the island, especially since he is already head of the choirboys. * The boys decide to have a vote, everyone except the choir votes for Ralph as their leader * Seeing that jack is mad at being defeated, Ralph offers him the position of Head of the Hunters. ...read more.

Ralph and the older boys try to comfort him and explain he has probably had a nightmare. Many of the boys though start feeling uneasy. * The boys decide to build a fire signal on the top of the mountain to attract the attention of some passing ship or airplane. In sudden excitement, all the boys run up the hill leaving only Ralph and Piggy on the beach. * Piggy is appalled with their juvenile behavior. * Ralph dashes after the others and then Piggy follows slowly. * On the mountaintop, the children excitedly collect dry and rotten wood. * Once the pile of wood is ready, they realize they have no matches to make the fire. Jack proposes using Piggy's glasses and disrespectfully grabs them off his face. * Piggy complains about the senseless haste of the boys, they refuse to listen and ridicule him * After the fire has died down, the boys hold a meeting on the mountaintop, and it is determined that Jack's hunters will be in charge for keeping the fire burning. * Piggy points out that the little boy with the mark on his face, the one who beforehand brought up the "beastie", is missing. The boys are filled with fear and shame. ...read more.

Their need for order is becoming greater and greater and the story progresses because they keep messing up along the way which is decreasing their chances of successful living. D.) Conch Shell- It is a deep cream color and touched hear and there with a light pink. It is eighteen inches with a slight spiral twist. It has a whole at the tip which had been worn away. Piggy and Ralph discovered it during their first few minutes on the island. The conch is used at first to join everyone together on the island. It then for who ever has it in their possession may speak at a meeting and everyone must listen and no one shall interrupt except for Ralph. The conch and Ralph and kind of inter twined, they just go together. Everyone has respect for conch and Ralph. Fire- The fire is an essential for the boys to survive on the island. It in a big stack of dead logs and such and when the boys want to make the smoke heavier they would add green plants onto it. It is blazing and deep shades of reds, oranges, and yellows. The fire at first was a good thing but soon Piggy bring to the attention that they have other things that need to be done rather than start and put out fires. ...read more.