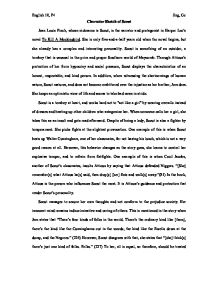 Character Sketch of Scout - Jean Louis Finch, whose nickname is Scout, is the narrator and protagonist in Harper Lee's novel To Kill A Mockingbird.

Character Sketch of Scout Jean Louis Finch, whose nickname is Scout, is the narrator and protagonist in Harper Lee's novel To Kill A Mockingbird. She is only five-and-a-half years old when the novel begins, but she already has a complex and interesting personality. Scout is something of an outsider, a tomboy that is unusual in the prim and proper Southern world of Maycomb. Through Atticus's protection of her from hypocrisy and social pressure, Scout displays the characteristics of an honest, respectable, and kind person. In addition, when witnessing the shortcomings of human nature, Scout matures, and does not become embittered over the injustice as her brother, Jem does. She keeps an optimistic view of life and seems to take bad news in stride. Scout is a tomboy at heart, and works hard not to "act like a girl" by wearing overalls instead of dresses and beating up other children who antagonize her. ...read more.

Her innocent mind remains indiscriminative and caring of others. This is mentioned in the story when Jem states that "There's four kinds of folks in the world. There's the ordinary kind like [them], there's the kind like the Cunninghams out in the woods, the kind like the Ewells down at the dump, and the Negroes." (226) However, Scout disagrees with that, she states that "[she] think[s] there's just one kind of folks. Folks." (227) To her, all is equal, so therefore, should be treated equal. She forms a code of conduct very similar to Atticus, a code of understanding and acceptance of all human beings. Despite the rules of etiquette governing life in her small town, Scout voices her opinions and recognizes hypocrisy and injustice in her elders. In addition, from the guidance and help Scout has received from her father, Atticus, her perspective on life develops from that of an innocent child into that of a near grown-up. ...read more.

(30) As a result, Scout develops a more grown-up perspective, an optimistic view of life that enables her to appreciate human goodness without ignoring human evil. The lessons Scout learns from her father set her mind on a non-prejudice path. She progresses from a childish tomboy to a mature young girl without losing her innocence, and begins to look at life in an optimistic way. At the end of the story, Scout recognizes that "Atticus was right. One time he said you never really know a man until you stand in his shoes and walk around in them. Just standing on the Radley porch was enough."(279) She was not just standing on the Radley porch, looking things in Boo's point of view, but also from her own, looking back on events that happened years earlier with a greater maturity and understanding. With the consciousness and beliefs she holds, she will never be destroyed like a mockingbird no matter what evils she confronts in her future life. English 10, P4 Jing, Ge ...read more.