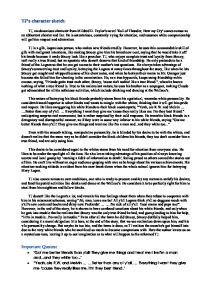 Character Sketch - TJ, from the Roll of Thunder, Hear my Cry

TJ's character sketch TJ, an obnoxious character from Mildred D. Taylor's novel 'Roll of Thunder, Hear my Cry' comes across as an abhorrent cheater and liar. He is ostentatious, constantly vying for attention, and assumes white companionship will get him respect and admiration. TJ is a glib, loquacious person, who makes new friends readily. However, he uses this commendable skill of glib with malignant intentions, like making Stacey give him his brand new coat, saying that he would take it off his hands because it made Stacey look like a preacher. TJ, who enjoys complete trust and loyalty from Stacey, isn't really a true friend, but an apostate who doesn't deserve that kind of friendship. He only pretends to be a friend of the Logans so that he can get access to their mother's test questions. He always takes advantage of Stacey's unswerving trust and loyalty, betraying the Logans at many times throughout the story, like when he lets Stacey get caught and whipped because of his cheat notes, and when he betrays their mama to Mr. ...read more.

He treats his black friends in a derogatory and disrespectful manner, as if they were in some way inferior to his white friends, saying "Got me better friends than y'all! They give me things and treat me like I'm a man and...and they white too..." Even with his smooth-talking, manipulative personality, he is blinded by his desire to be with the whites, and doesn't realize that the same way as he didn't consider the black children his friends, they too don't consider him a true friend, and are only using him. This desire to be considered equal to the whites stems from his need for attention from everyone else. He likes to be under the spotlight all the time. He also loves taking advantage of his position of always knowing secrets and local gossip by ' nursing a tidbit of information to death', feeling proud as others coaxed the stories out of him. He can't live without an eager audience gasping with awe as he brags about his various achievements. ...read more.

Even after all the harm he did Stacey, Stacey dutifully helped him, considering it a moral obligation. It is here, at the end of the story, that we see realisation dawn upon him, and his vile personality change. But maybe its too late, and the harm is done, as TJ realises the mess he's got himself into due to the very white friends who he sacrificed so much to become companions with. Here the author leaves us on a mysterious tone, leaving it up to our imagination as to what will happen to the reformed TJ. Important Quotes: * "Got me better friends than y'all! They give me things and treat me like I'm a man and...and they white too..." * "Yeah, ole R.W. and Melvin ... ...Better than any of y'all. ... Everything I want they give me 'cause they really likes me. I'm they best friend.' * '...in his usual sickening way of nursing a tidbit of information to death...' * 'TJ looked around grimly and whispered, ' Like ... death.' He waited a moment for his words to be appropriately shocking' Words: 1. Verisimilitude 2. Loquacious 3. Abhorrent ?? ?? ?? ?? ...read more.