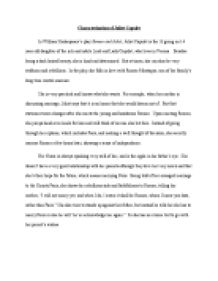 ﻿Characterization of Juliet Capulet In William Shakespeare?s play Romeo and Juliet, Juliet Capulet is the 13 going on 14 year old daughter of the rich and noble Lord and Lady Capulet, who lives in Verona. Besides being a dark haired beauty, she is kind and determined. But at times, she can also be very stubborn and rebellious. In the play, she falls in love with Romeo Montague, son of her family?s long time mortal enemies. She is very practical and knows what she wants. For example, when her mother is discussing marriage, Juliet says that it is an honor that she would dream not of. ...read more.

Her Nurse is always speaking very well of her, and is the apple in her father?s eye. She doesn?t have a very good relationship with her parents although they love her very much and that she?s their hope for the future, which means marrying Paris. Being told of her arranged marriage to the County Paris, she shows her rebellious side and faithfulness to Romeo, telling her mother, ?I will not marry yet; and when I do, I swear it shall be Romeo, whom I know you hate, rather than Paris.? She also tries to stands up against her father, but instead he tells her she has to marry Paris or else he will ?ne?er acknowledge her again.? So she has no choice but to go with her parent?s wishes. ...read more.

Her actions show her honesty in her relationship with Romeo, proving that she would go through great lengths just to be with him, and not taking into heart that the plan could go wrong. Going through with the plan, it doesn?t turn out as she expected. Upon discovering her ?dead? body in the tomb, Romeo drinks a poison which kills him because he can?t imagine living in a world without Juliet. Waking up expecting to find Romeo by her side waiting for her, she instead finds him dead. Taking a dagger, she kills herself because she wants to be with Romeo. Her choices and actions establish her as far more complex character than her family, and maybe even Romeo. ...read more.