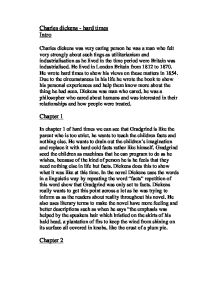 Charles dickens - hard times Intro Charles dickens was very caring person he was a man who felt very strongly about such tings as utilitarianism and industrialisation as he lived in the time period were Britain was industrialised. He lived in London Britain from 1812 to 1870. He wrote hard times to show his views on these matters in 1854. Due to the circumstances in his life he wrote the book to show his personal experiences and help them know more about the thing he had seen. Dickens was man who cared, he was a philosopher who cared about humans and was interested in their relationships and how people were treated. Chapter 1 In chapter 1 of hard times we can see that Gradgrind is like the parent who is too strict, he wants to teach the children facts and nothing else. He wants to drain out the children's imagination and replace it with hard cold facts rather like himself. Gradgrind seed the children as machines that he can program to do as he wishes, because of the kind of person he is he feels that they need nothing else in life but facts. Dickens does this to show what it was like at this time. In the novel Dickens uses the words in a linguistic way by repeating the word "facts" repetition of this word show that Gradgrind was only set to facts. ...read more.

Dickens shows that he is naturally interested in illustrating that fiction cannot be excluded by doing all he can in the novel to prove Gradgrind is wrong he feels that we all need facts and fiction in our life, Dickens feels that it is not normal for the equilibrium to be distorted like this. Dickens uses mono-syllabic language to help emphasise certain things one example of this is when Gradgrind says "what I want is facts." Dickens uses this kind of linguistic terms to create a sense of urgency in his tone. We see that Gradgrind wants disparity to force facts into his pupils. At the point sissy dupe were interrogated Gradgrind uses certain language as to help describe Dickens opinion, such as when he says "girl number 20, give me your definition of a horse" this shows that Gradgrind tries to pressure sissy and this shows that Gradgrind is a fact filled strict old man. Chapter 3 In chapter three we learn more about Gradgrind by seeing were Gradgrind lives and about his child hood, we also learn more about his children tom and Louisa and the experiences they have and how dickens describes these things. Firstly we see that Gradgrind's home stony lodge is very much like Gradgrind it is cold, boring and emotion less in the text it also says that the windows were similar to his eye brows, like big dark caves hanging over his eye. ...read more.

That was the cot of infancy; and old egg-box". In this chapter we get to know more about Bounderby and Gradgrind, and how two people with very different childhood grew up to be so very similar Dickens uses antitheses to show this. WE e also get to meet Mrs Gradgrind who was, (quote from text) "a thin little white, pink-eyed bundle of shawls of surpassing feebleness, mental and bodily", and who whenever she showed a symptom of coming to life was variably stunned by some weighty piece of fact tumbling on her. Mrs Gradgrind hoped it was a dry ditch, from this quote we see that Mrs Gradgrind is an unwell woman who, when she shows any sign of getting better is beaten back down by her husbands facts. Dickens uses similes and metaphors to describe Mrs Gradgrind; e.g. he describes her as a pink eyed bundle of shawls, reinforcing what he already knew of her physical appearance. Dickens has already told us that she is thin, so the metaphor suggests she is swamped by her clothes making her look even scrawnier. Conclusion In conclusion, Dickens uses the first four chapters to show us the main character and introduce the ideas of the novel. This is done by using key linguistic terms and aids like metaphor's to add to descriptions of people. The first four chapters are used to show u descriptions of the main characters and descriptions of the lives they lead and what kind of people they are and were they live est. This is very helpful as it introduces us to the rest of the story. ...read more.