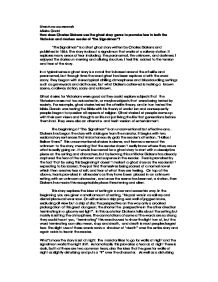 Literature coursework Mieke Gadd How does Charles Dickens use the ghost story genre to provoke fear in both the Victorian and modern reader of "the Signalman"? "The Signalman" is a short ghost story written by Charles Dickens and published in 1866. The story is about a signalman that works at a railway station. It explores many areas of fear including: the paranormal, the unknown, and darkness. I enjoyed the stories un-nerving and alluring structure. I feel this added to the tension and fear of the story. In a typical sense a ghost story is a novel that is based around the afterlife and paranormal, but through time the word ghost has been replaced with the word scary. They began with stereotypical chilling atmospheres and bloodcurdling settings such as graveyards and old houses, but what Dickens achieved is making a known scene, a railway station, scary and unknown. Ghost stories for Victorians were good as they could explore subjects that the Victorians were not too educated in, or maybe subjects that were being tested by society. For example, ghost stories tested the afterlife theory, and in turn tested the bible. Darwin was testing the Bible with his theory of evolution and consequently people began to question all aspects of religion. Ghost stories let people come up with their own views and thoughts on life not just living the life that generations before them had. They were also an alternate and fresh version of entertainment. The beginning of "The Signalman" is an unconventional but effective one. ...read more.

This narrator isn't very conventional as it isn't common for a ghost story to have a narrator, normally they are written fully in the third person, all description and written through a lense but by having a narrator it almost makes the reader part of the novel. This provokes fear by instead of having the reader look at a chilling moment they are in a chilling moment. The other character is the signalman, the leading role and title of the book. The signalman is an unclear character at first, the fidgety and slightly insane vibe that he gives of creates an instant fear, and uneasy sense in the reader. The beginning of the story he doesn't respond to the narrator's speech, making him slight perturbed. ""Halloa! Below there!" When he heard a voice thus calling to him, he was standing at the door of his box, with a flag in his hand, furled round its short pole. One would have thought, considering the nature of the ground, that he could not have doubted from what quarter the voice came; but instead of looking up to where I stood on the top of the steep cutting nearly over his head, he turned himself about, and looked down the Line... "Halloa! Below!"...He looked up at me without replying." Here you can see that he 'narrator calls twice after the signalman doesn't respond but simply just looks around. From then on the reader has a question mark over that character but when it is revealed that the signalman has been seeing things he can't explain and that he is scared ...read more.

Many Victorians also felt this way and The Signalman add to that unsure knowledge of death making many Victorians think, and therefore remember the story and remember Dickens. As for the modern reader the story doesn't have the same question mark hanging over it as we are much more clued up on many different theories but it can be used as evidence or a source as maybe Dickens writing the signalman saw his own death means that you life does flash before your eyes before you die, or that Cod had a vision of his train crashing. It can never be said but I feel any reader of any age or any era is going to question death after this story. I feel that this interesting and chilling novel is a fantastic contribution to the ghost story genre as it doesn't quite fit the mould but somehow is still exceptionally unsettling and haunting. The untypical structure makes the original plot even more exiting and the twisted finish polishes the stories unnerving scheme perfectly. The not so evolved Victorians would have pondered about this story for a long time and I feel the most fear provoking part of this story is the fact that there are many different ways of perceiving it making the reader question itself, and this conversation staring novel gets the reader finding out how they really feel about death, making it almost educational. All in all I feel Dickens achieved what he set out to do with this novel and it shall defiantly bag itself a place on my bookcase. ...read more.