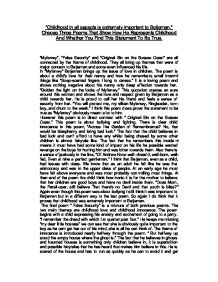 &quot;Childhood in all aspects is extremely important to Betjeman.&quot; Choose Three Poems That Show How He Represents Childhood And Whether You Find This Statement To Be True.

"Childhood in all aspects is extremely important to Betjeman." Choose Three Poems That Show How He Represents Childhood And Whether You Find This Statement To Be True. "Myfanwy", "False Security" and "Original Sin on the Sussex Coast" are all connected by the theme of childhood. They all bring up themes that were of major concern to Betjeman and some even influenced his life. In "Myfanwy" Betjeman brings up the issue of love in children. The poem is about a child's love for their nanny and how he remembers small intermit things like "Soap-scented fingers I long to caress." It is a loving poem and shows nothing negative about his nanny only deep affection towards her. "Golden the light on the locks of Myfanwy." This quotation creates an aura around this woman and shows the love and respect given by Betjeman as a child towards her. He is proud to call her his friend and feels a sense of security from her. ...read more.

We know that as an adult he felt like he was the aristocracy and was in the upper class of people. At an early age he must have felt above everyone and was most probably controlling most things. At then end of the poem the child think how ironic it is for the mother to believe that her children are good boys and have no devil inside them. "Does Mum, the Persil-user, still believe That there's no Devil and that youth is bliss?" Again even though this poem was about bullying I still think it was important to Betjeman but in a different way to the last poem. So again I do think that it proves that childhood was extremely important to Betjeman. The final poem " False Security" is a mixture of both previous poems. The two main themes are childhood love and childhood innocence. The poem begins with a child expressing his anxiety and excitement of going to a party. ...read more.

"Thrill at the candle shine On cakes and ices and jelly and blackcurrant wine," He also feels a sense of security when "And the warm little feel of my hostess's hand in mine?" this introduces the theme of childhood love. He was so happy with himself that even though Betjeman's worst fear could not "diminish my joy," "I WONDER WHERE JULIA FOUND THAT STRANGE, RATHER COMMON LITTLE BOY?" The fact that line is in capitals underlines the importance of it. Betjeman hated to be called common and even this could not reduce his happiness. This I think is less important to the rest of the poems however I still think it has some important aspects and does show that childhood was important to Betjeman. All these poems show how important childhood is to Betjeman. Whether it was the love of his nanny or innocence of childhood they all seem very important to Betjeman, if they weren't he would not have written them. ...read more.